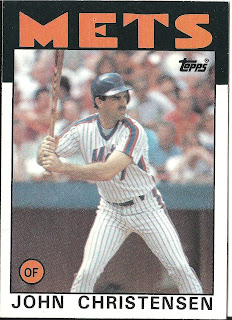 Card thoughts: A nice picture of Christensen getting ready to swing at Shea. The mustache makes him look older than the rookie he is in this picture. This is his rookie card, and he would have just one more Topps card.

The player: Another obscure Mets rookie from this season (the other being Kelvin Chapman). This guy was long gone before the Mets began their reign as the top NL team.

Christensen was drafted originally by the Angels but elected to go to California State University instead. He finally signed with the Mets after graduating, and was immediately sent to the South Atlantic League. As a 21 year old, he was a little advanced for low-A ball, and he dominated there, leading the league in runs batted in with 97, and scoring another 100.

Although the rest of minor league numbers were not particularly impressive, Christensen was in the majors two years later, debuting on my sister’s sixth birthday as a pinch hitter (for #80 Daryl Strawberry no less!) in a game where the Mets were being blown out by the Pirates. For the rest of the 1984 season, he batted .273.

Christensen was featured in the famous mock article written by George Plimpton about Mets prospect Sidd Finch for Sports Illustrated.  But that would be the highlight of his 1985 season. Due to the poor health of George Foster and Daryl Strawberry, Christensen was part of a platoon with Danny Heep and the beginning of the year.  However, he hit an unimpressive .186 (although he showed a good eye at the plate—his on-base percentage was 100 points higher). Sent to the minors when Strawberry and Foster were healthy, he hit .212.

Still a top prospect despite his poor 1985 season, Christensen was packaged in the deal with #210 Calvin Schiraldi in the deal that brought #11 Bob Ojeda to the Mets. He was presumed to have the inside track as a platoon partner for aging designated hitter Mike Easler, however he never played in the majors that year after the Red Sox acquired Don Baylor to fill that role. Another bad year at AAA convinced the Red Sox to part with Christensen, but he was once again included in a big trade with playoff implications, as he was sent to the Mariners after the end of the 1986 season as the player to be named later for #221 Dave Henderson and #248 Spike Owen.

Christensen got another chance to prove he was major league caliber in 1987. After starting the year tearing up the Southern and Pacific Coast Leagues, he was called up to the Mariners where he hit decently enough (.242/.306/.654), but was no better than a generic replacement player.

He was hitting .300 at AAA Calgary before the Mariners released him in May of 1988. Five days later, he was signed by the Twins, where he saw his last major league action. In 38 at bats, he hit .263. His pro career ended after one last season at AAA. 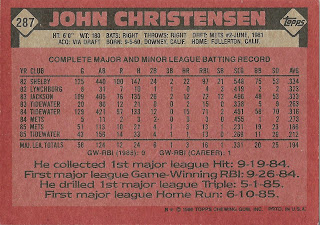 Rear guard: Christensen was pinch hitting for Keith Hernandez in a blowout when he doubled off Phillies pitcher #120 Steve Carlton for his first major league hit.
Posted by Jets Break Jaws at 12:52 PM

When I was trying to complete this set, I picked up this card and was blown away that I had no knowledge of a Met from 1986. (I read the Sidd Finch story back then, so I should've made the connection).