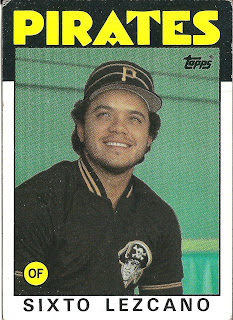 Card thoughts: One of best names in the set, I remember this guy for the melodic way his name rolls off the tongue. As he looks up boyishly at the camera, Lezcano is celebrating the last of his 11 Topps cards.

The player: Lezcano hit out of an exaggerated crouch and had straight-away power. But injuries kept him from realizing his full potential. In the years he managed to get into over 130 games, he was really productive, including in the field where he routinely ranked in the top ten in assists in right field. Despite his power stroke, Lezcano was a patient hitter who rarely swung at bad pitches.

Signed by the Brewers, he spent four years in the minors, his best season being at Sacramento in 1974 when he hit 34 home runs, scored 100, and drove in 99. This brought him up to the bigs where from 1974-1979, he was the Brewers regular right fielder. He got in hot water as a rookie when he argued with a fan, but managed a respectable 11-43-.247 line. While a consistent hitter from that point forward, Lezcano would never top his 1979 season where he was one of the ten best position players in the American League. Lezcano hit 28 home runs, drove in 101, and had an extraordinary (for the time) OPS of .987 (and an OPS+ of 164). His offensive numbers finally got him recognized for his glove work, and he got his first, and only, gold glove that season.

In 1980, Lezcano slumped badly, although he started off the season with a record breaking second opening day grand slam. His average and on-base percentage dropped about 100 points, and only played in 112 games.

Traded to the Cardinals in a massive trade that included #237 Ted Simmons, #185 Rollie Fingers, and Pete Vukovich (to the Brewers), and David Green, Dave LaPoint, and Lary Sorensen (with him to the Cards), Lezcano was little more than a backup for the Cardinals, as they were well set with #190 George Hendrick in right field.

It only took a year for Lezcano to be part of another blockbuster trade, this one involving #90 Garry Templeton and Ozzie Smith. With the Padres, Lezcano had his last great season, as he was the 9th best National League position player on the strength of his top-10 placing in on-base percentage (.388); OPS (.860); adjusted OPS+ (145); and assists in right field (16-led the league).

Once again, however, a dismal season followed, with Lezcano only managing a .233 average as he lost his job to a young #10 Tony Gwynn. He was sent to the Phillies for the stretch run, and platooned with Joe Lefevre in the NLCS and World Series. Lezcano hit better in the former (.308 and a two-run home run off Rick Honeycutt in 13 at bats).

Another platoon year saw Lezcano get the bulk of the playing time against right handers, and he turned in his last season appearing in over 100 games. Despite only 71 hits, he hit 14 home runs and posted a respectable .480 slugging percentage.

Lezcano's final season with the Pirates was spent mainly on the bench as a pinch hitter, a role he was not good at, hitting only .207. He was part of a bunch of overpaid veterans (including Jason Thompson, Steve Kemp, and Bill Madlock) whose struggles made them impossible to move in trades, and who were holding back the young nucleus of the great Pirate teams of the late 80s.

Lezcano is the hitting coach for the Rookie League Danville Braves. 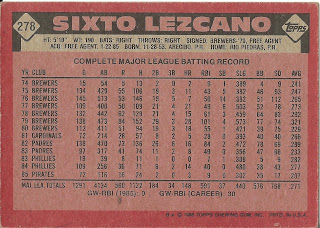 Rear guard: As can be seen by this card back, Lezcano had a real up and down career in the 80s.
Posted by Jets Break Jaws at 10:49 PM