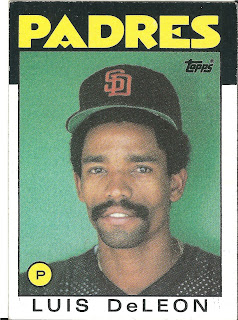 Card thoughts: The dugout/mug shot pervades this set. I’d rather have the posed “action” shots of the 60s and 70s (or at least show DeLeon outdoors, not like he’s being shot in an office somewhere). Interestingly, two of the players he was involved with in a trade (#278 Sixto Lezcano and #281 Steve Mura) have recently been discussed here (and are both shot in the dugout). This would be DeLeon’s last Topps card.

The player:  Not to be confused with #75 Jose DeLeon, but probably confused many people as a child, as his other brothers were also named Luis (he was nicknamed “Mambo”). DeLeon, as a younger man, was a really good closer for the Padres. As a rookie, he saved 15 games, won 9, and had a 2.03 ERA. This got him ranked fifth in the Rookie of the Year voting that year. More of the same was in store in 1983. Although his ERA went up by half a run, he was still under 3. DeLeon saved another 13 games that season. His out pitch was a sweeping slider (he threw sidearm), which he had a tendency to hang.

But the Padres acquired veteran Goose Gossage to close out games in 184, so DeLeon was shifted into middle relief for the division winners. He did not take well to the role, and his ERA ballooned above 5. This got him left off the post season roster. DeLeon was not much better the season following, as he got little work (only 38 2/3 innings) and sported another mediocre ERA.

He was released by the Padres after the season, and that was the last regular major league work he got. DeLeon did hang around in pro ball until 1995, pitching a bit for the Orioles (20+ innings in 1987) and Mariners (1 game, his first start in the majors). But his real passion was the Puerto Rican Winter League. He represented the team a record 12 times in the Caribbean Series (career record: 4-2). 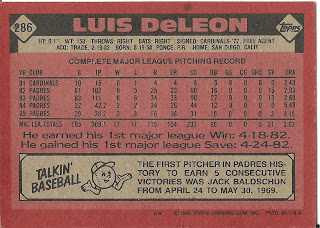 Rear guard: For his first save, DeLeon pitched 2 innings and gave up only 1 hit.


Jack Baldschun was a really good long reliever for the Phillies in the mid 60s, twice winning over 10 games and leading the league in games pitched his rookie season. His card from that year would be his final one.
Posted by Jets Break Jaws at 9:17 PM