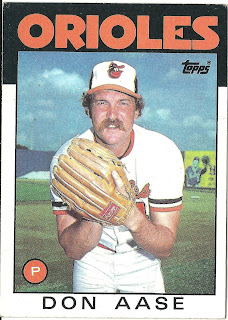 Card thoughts: This is a really unfortunate card featuring Don Aase (Ah-see). His looming, too large head (and glove!) makes him look like an overfed chipmunk. Unfortunately, Topps decided to repeat this mistake on his two subsequent cards. Aase looks normal on his cards with the Angels.

The player: Aase’s career trajectory is similar to many players who came up in the 70s. A few years of ineffective starting, followed by a few years as closer (generally, by default), then finally, a career tailing off as a long reliever and/or mop up man.

With a name almost guaranteed to be near the beginning of any baseball player encyclopedia (David Aardsma now holds the spot), Aase was drafted by the Red Sox where he went 0-10 in his first pro season at short-season A-ball. He followed that up with a league leading 15 losses in the Florida State League. But he was a young man for the leagues he was pitching in, and at age 19, Aase turned it around with a dominant performance in the Carolina League where he led in wins (17), ERA (2.43), complete games (18), and innings pitched (230).

From there, it was a rapid rise to the majors, and Aase showed great promise as a rookie, going 6-2 with a 3.18 ERA in 13 starts. The Angels liked what they saw and traded their starting second baseman, Jerry Remy, to get him. Aase won 11 games for the Angels in 1978, the most he would win as a starter. The next two seasons, he was pretty bad, losing in double digits each year and being bumped out of the starting rotation both years because of ineffectiveness. Aase did record the first ever post-season win by an Angels, when he pitched in relief of Frank Tanana in game 3 of the ALCS. He blew the 2-1 lead he was handed, but won when the Angels came back in the bottom of the ninth.

Bumped out of the rotation for good in 1981, Aase began a second (and more successful) career as a late inning reliever. He put up 11 saves to lead the Angels that season. The following year, manager #81 GeneMauch went for a closer-by-committee, and Aase’s save total dropped to 5. He then spent 2 seasons battling elbow woes (he missed all of 1983).

Not confident in Aase’s full-strength return from the elbow injury, the Angels neglected to sign him after the 1984 season. The Orioles picked him up, and here he would have his most successful seasons. He reached the top 10 in winning percentage the season shown on this card (.625) and converted 14 save opportunities. Aase shared the closer role with incumbent Sammy Stewart, but when the latter was shipped to the Indians, the role was his for the 1986 season. Aase became one of the top closers in the American League that year, saving 34 games. He even got the save in the all star game by inducing Chris Brown (Brown was an all star?) to hit into a double play.

But injuries would mar the rest of his career. A shoulder injury shelved him for much of the 1987 season, and by the time he returned in ’88, #56 Tom Neidenfuer had taken over the closer role. Aase would finish his career as a middle reliever for the Mets (1989) and Dodgers (1990). 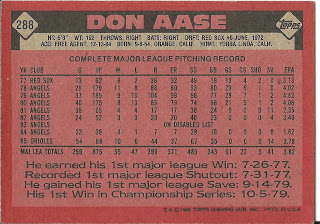 Rear guard: Aase's first win came in his major league debut against the Brewers, and was a complete game. He gave up a hit per inning, and struck out 11. Out of the three runs he allowed, only two were earned.
Posted by Jets Break Jaws at 10:49 PM