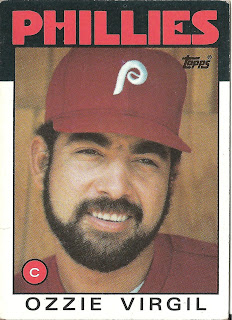 Card thoughts: I remember this card struck me in my collecting days and now I know why. It's the wood-paneling in the background. It looks like Topps caught him unawares, chilling in his rec room. Also, brown background really highlights the fact that the Phillies "red" colors then were more maroon than their traditional red.

The player: Ozzie's dad and namesake was the first Dominican to play in the major leagues. When junior played in the 80s, there were many more Latin American players, but probably only half as many as play today. Virgil tore up the minors, winning Carolina League MVP honors after hitting 29 home runs and driving in 98 in 1978. He also drove in over 100 runs in the Eastern League a couple of years later. But his defense was never as solid as his hitting, so Virgil saw limited playing time in his first four years with the Phillies, serving as backup to Bo Diaz until earning the starting gig at age 27 in 1984. He immediately made an impact, and was one of the premier hitting catchers in his prime. He made the all-star team in the year shown on this card (when he hit 19 home runs and drove in 55) and in 1987 when he was with the Braves (27 home runs and 72 RBIs). But Virgil only had 4 good seasons. After his production dropped off in 1988, he signed as free agent with the Blue Jays were injuries limited him to only 11 games in 2 seasons. He retired young at age 33. 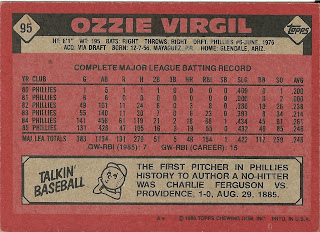 Rear guard: Topps has always loved the awkward verb. I don't think I've ever heard the term "author" in regards to a no-hitter but who knows, maybe people were a lot more formal in the 19th century. I can only assume Topps dug up this long ago fact as it was 100 years before this set. Ferguson pitched 405 innings that year for the Philadephia "Quakers" winning 26 and losing 20. He completed all of his 48 starts. He also played a little outfield on his off days.
Posted by Jets Break Jaws at 9:54 PM