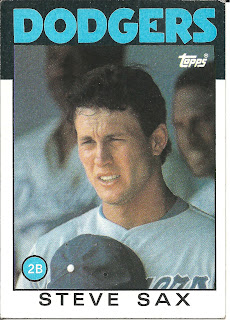 Card thoughts: Another card I remember vividly, all these years later. Probably because Sax is one of the few players I've ever seen on a card listening to the national anthem. Although I suspect Topps wanted to highlight the "Hollywood" good looks of Steve Sax for all the girls who collected cards at the time.

The player: Sax started off like a rocket, winning the Rookie of the Year award in 1982. However, he wasn't a complete player yet. He was a poor fielder, especially when turning the double play, and he had almost no power. What he did have was speed to burn: He stole 49 bases his rookie year.

The next year, Sax avoided the dreaded sophmore slump by nearly matching his rookie batting average, but stealing 56 bases (although he led the league in caught stealing) and scoring 94 runs. He made his second all star team as well. But in the field, Sax developed the mental block that prevented his from throwing the ball to first, one of the easiest throws on the infield from second. This caused  Sax to commit 30 errors, 13 more than an aging Joe Morgan. His throws were so erratic, box seat patrons behind first would wear batting helmets as a joke.

This condition would continue on and off throughout his times with the Dodgers. Sax's hitting regressed in 1984 and 1985, likely because he was concentrating so much on fielding. The season shown on this card was the worst in his career. Although he hit .279, he had a pathetic 16 extra base hits out of 136 overall hits. Sax also only stole 27 bases, a career low as a regular.

Sax would turn it around in 1986, having the best season of his career. He was the second leading hitter in the league, and also made the top ten in on base percentage (.390), runs scored (91), hits (210), doubles (43), and stolen bases (40). At this point, Sax was undoubtedly the second best second baseman in the league behind Ryne Sandberg.

After Sax's breakout season, he had two more good years as the Dodgers leadoff man. In the 1988 World Series he shone, hitting .300 and scoring 3 runs. Sax also parlayed his fame and good looks into being a guest star on several shows including Square Pegs, Who's the Boss, Hollywood Squares, and Sabrina the Teenage Witch. Most memorably, Sax was invited the be on the softball "ringer team" created by Mr. Burns on the Simpsons. He was prevented from playing when he was accused by Chief Wiggum of being the culprit in all the unsolved murders in New York City and thrown in jail.

Sax left the Dodgers in 1989 as a free agent and landed with the Yankees, where he had a season almost as good as his 1986 season, once again collecting over 200 hits, hitting over .300, and making the all star team. He had one more stellar season in him in 1991, when he hit a career high 10 home runs. But then, the White Sox made an ill-advised trade, sending Melido Perez and Bob Wickman, two of their better pitchers, to the Yankees for him. Sax never hit above .230 with the White Sox and was released in spring training in 1994. After 7 games with the A's that season, Sax was done.

After his playing days were over, Sax ran for state assembly but withdrew as his wife was dishing some nasty gossip about him when they were going through a bad divorce. He currently uses the overcoming of his throwing problems as a basis for his career as a motivational speaker. 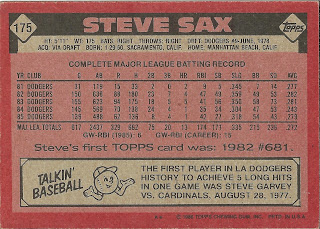 Rear guard: Here's Sax's first Topps card. Mike Marshall would have a long productive career with the Dodgers and will be discussed at greater length later on this blog. #63 Ron Roenicke was already discussed.

This day in baseball history: In 1946, Pie Traynor and Herb Pennock are elected to the Hall of Fame.
Posted by Jets Break Jaws at 10:32 PM

I think "long hits" *is* a legitimate term, but an old-fashioned one that has now fallen completely out of use. It would probably be more at home on a 1955 baseball card than a 1985.