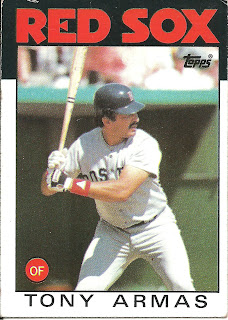 Card thoughts: I don’t believe there are any Red Sox players in pinstripes in this set. And this card looks a lot like #164 SteveBalboni’s in this set.

The player: Tony Armas—awesome arm in right field, probably the best in the American League (remember when that was a prerequisite for starting in right field?), prodigious power, really poor at making contact.

Back when Latino players were much less common, Armas was signed out of Venezuela by the Pirates in 1971 at age 17. His power numbers increased every year in the minors, as did his strikeouts. Armas hit 21 home runs in the International League in 1976 in just over 400 at bats, which earned him a call up to the majors where he only got 6 at bats.
The Pirates didn’t get to enjoy Armas for long, as he was included in a massive trade with the A’s in the off season (#83 Phil Garner, profiled earlier in this blog, was one of the players sent from the A’s to the Pirates). Armas was installed in right for the A’s and he hit 13 home runs in 118 games a sported a nice afro. The next two seasons were marred by injury, in what would be a recurring issue with Armas. Finally healthy in 1980, he exploded for 35 homers and 109 RBIs. On the downside, he walked only 29 times in 666 plate appearances, and struck out 128 times (2nd in the league in that more contact-oriented time).

Armas was even better in the following strike-shortened season. He made the all-star team and led the league with home runs (22) and was 2nd in RBIs (78). 28 home runs in established Armas as a slugger to be feared, but his .233 average and 128 strikeouts in were warning signs to the A’s. The 1982 season also saw Armas set a record in right field when he had 11 putouts and 12 total chances in right field against the Blue Jays.

Needing a third baseman, the A’s traded him to Boston for #134 Carney Lansford in a deal that worked out for both teams. Liberated from the hitter unfriendly Oakland Colliseum, Armas had a good power hitting season in 1983, despite a low .218 average, and then put up career numbers in 1984, leading the league in home runs (43), runs batted in (123) . . . and strikeouts (156). By this time, Armas had moved to center field (#60 Dwight Evans was patrolling right).

The season that ended before this card was issued found Armas struggling to replicate his awesome ’84 numbers, as he battled leg injuries most of the year and hit only 23 home runs. Now in his early 30s, Armas started to fall apart, and he was reduced to a backup role in 1986 after the Red Sox acquired #221 Dave Henderson to play center. Armas started in the ALCS, but a .125 average and Henderson’s post season heroics benched him for the World Series, where he struck out in his only plate appearance.

By 1987, Armas was with the Angels where he struggled to remain on the field, only getting into 28 games in his first season with the club. He managed to land his last starting gig in left field in 1988, and he hit 13 home runs and drove in 49, respectable stats, but not at the level of his production a few years before. Armas retired after the 1989 season, when he produced a lot of power for a pinch hitter and fourth outfielder.

Armas played in the Venezuelan pro league for a few years afterwards, where he held the record for most career home runs (97) for several years. He’s still involved with the league as the batting coach for the Leones del Caracas club. Armas’ namesake son pitched for several years with the Expos and various other clubs. 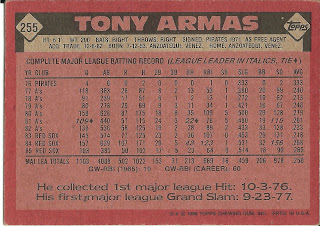 Rear guard: This is pretty interesting. The Pirates defeated the Cardinals by identical 1-0 scores in a doubleheader on the last day of the 1976 season. Armas' only two hits that year were in the second game. His first hit was a single to center; but his second was a clutch 2 out-single in the bottom of the ninth scored pinch runner Miguel Dilone with the winning (and only) run.
Posted by Jets Break Jaws at 10:13 PM

"I don’t believe there are any Red Sox players in pinstripes in this set."

Red Sox in pinstripes? How dare you, sir? I believe that you mean their home whites.

I believe that Armas injured himself in the ALCS, in fact it was either Game 4 or 5 (I think it was the latter, but I'm going by memory) which is the one where Henderson gave up a homer, but slammed a Donnie Moore pitch into the left field seats and won the game with a sac fly in extra innings.

Another interesting thing about Tony Armas Jr.: he was part of two instrumental trades for the Red Sox:

1. He was exchanged for Mike Stanley in the last transaction between the Sox and Yankees.
2. That winter he was sent along with Carl Pavano to the Expos for Pedro Martinez.

So thank you Tony Armas Sr. for getting the Boston Red Sox Pedro Martinez.