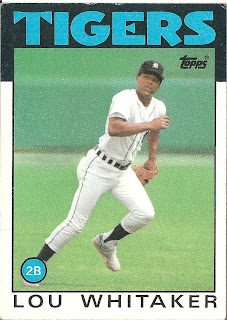 Card fact: It's time for an update to our tally: In the first 14 cards of this set, 6 are action cards, 6 are head shots, and 2 are posed. Lou Whitaker was considered one of the best 2nd baseman of his era, and was an all-star, gold glove, and silver slugger winner this year. Hence, the card ending in 0.

Card thought: Whitaker's in his home whites and the stadium is NOT Tiger Stadium (I believe that is astroturf). It's likely that this shot was taken in spring training where Whitaker is going for a line drive.

The player: Whitaker was part of the longest double play combo in baseball history. He and Alan Trammell were double play partners from 1978-1995. He won the Rookie of the Year in 1978, and was a five time all star. A superior defensive second baseman similar to Hall-of-Fame second basemen Ryne Sandberg, Roberto Alomar, and Joe Morgan (all of whom were his contemporaries), he also amassed over 2,000 hits, 1,000 runs, and 1,000 RBIs. Many believe Whitaker will join these three in the Hall someday.


A few amusing stories about Whitaker: He forgot to pack his uniform for the all-star game for the year shown on this card. He used some replica uniforms for sale at the game, including a generic mesh hat and a blank white top, which he wrote his number "1" on the back in magic marker. Here's a picture. He also appeared on an episode of Magnum P.I. with double play partner Alan Trammell. Check out the unison beer drinking! 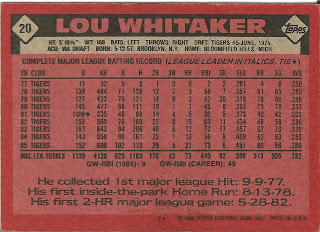 Rear guard: This was the prime of Whitaker's career. At the time the number of  runs, home runs, and RBIs this year were career highs; he would surpass all of these numbers in subsequent years. The inside-the-park home run was hit to center field at old Comiskey park and drove in Trammell and Ron LeFlore. The centerfielder for the White Sox, future Cub Thad Bosley, likely misplayed it.
Posted by Jets Break Jaws at 1:45 PM