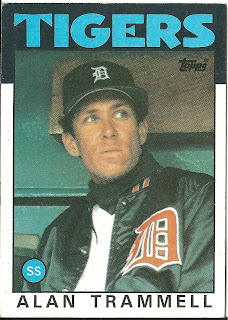 Card thoughts: Apparently #121 Nelson Simmons wasn't so alone. Looks like Trammell was right there with him (and looks similarly miserable).

The player: For the first six years of Trammell's 20 year career, he was one of the better American League shortstops in the field. He had above average range, a strong, accurate arm, and didn't make a lot of sloppy errors. Starting about 1983, Trammell began hitting the ball with more authority: He began to reach double digits in home runs and hit over .300 consistently. His first great season was the Tigers' World Series winning year of 1984. He finished in the top 10 in MVP voting while hitting .314 and driving in 69 runs.  He also won his fourth gold glove and went to his second all-star game. Trammell also batted .364 in the ALCS and .450 in the World Series.His best year came in 1987 however when he hit .343  garnered over 200 hits and drove in and scored over 100 runs. All these were career highs. He came in second in the MVP voting. Trammell would remain a productive player for the next several years, but injuries began eating significantly into his playing time after 1990.

Trammell retired in 1996, after playing his entire 20 year career with the Tigers, including a record 19 with #20 Lou Whitaker as his double play partner. There are many who believe that Trammell should be in the hall of fame (he got 24% of the votes he needed in the latest election). When you compare his stats to hall of famers Rabbit Maranville, Luke Appling, and Marty Marion, he certainly tops these guys. But he is unfairly compared to the modern day slugging shortstops rather than his peers who, with the exception of Ozzie Smith (for fielding) and Cal Ripken (for hitting) few could touch. That being said, his statistics compare to Edgar Renteria (not hall of fame caliber) and Barry Larkin (debatable). A longer discussion of whether Trammell is hall-worthy can be found here.

After his retirement, Trammell coached, and then managed, some horrendous Tiger team. The team he helmed in 2003 is the worst AL team ever in terms of losses (119). The next two years weren't much better, as the Tigers lost 90 or more each year. After being fired by the Tigers in 2005, he eventually became the bench coach for the Cubs from 2007-2010. After being passed over for the manager job in 2011, he rejoined his old teammate and batting and hitting coach Kirk Gibson as the bench coach for the Diamondbacks. 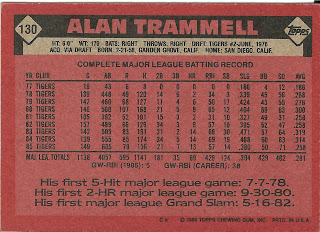 Rear guard: I turned 7 the day Trammell hit his first home run of the 1982 season against the Twins' Brad Havens. That grand slam drove in Lance Parrish, Johnny Wockenfuss, and Lynn Jones and cut the Twins' lead, 5-0 at the time, to just one run.
Posted by Jets Break Jaws at 9:00 PM

Good points raised by that piece on Trammell,very comparable to the Raines case. I think personally think he should make it. He brought a unique blend of defense and offense to his position, a rare gift easily overlooked by "stats" and only appreciated by his peers. It's no coincidence he peaked during the playoffs and when the game situation truly mattered. His achievements may only receive credit after his passing, such as the case with Ron Santo's.