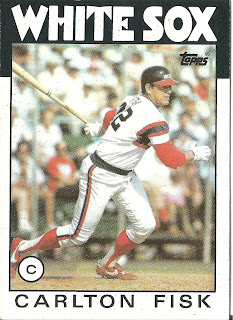 Card thoughts: This has to be a spring training game. Lots of bright whites going on here.

The player: In the 70s, you had three colossal catchers: Johnny Bench, Thurman Munson, and Carlton Fisk. Unlike the first two, Fisk continued his dominance well into the 80s.

Perhaps most famous for his willing of a game winning home run to go fair rather than foul in Game 6 of the 1975 World Series, Fisk, nicknamed “Pudge” came up with the Red Sox in 1969. He had to serve some time in the milirary (by the looks of his minor league numbers, from 1970-71), but he was up for good in 1972, where won the Rookie of the Year and his only gold glove. Fisk’s 9 triples his rookie year led the league, the last time a catcher would accomplish that feat.

Fisk looked to be a star in the making. But his longevity was in question after Leron Lee collided with him at home plate in the 52nd game of 1974 season. He tore several ligaments in his knee, and at one point was told he’d never play again. Of course, Fisk ended up catching the most games all time (now passed by Ivan Rodriguez). But the comeback started in 1975, when he hit .331 in 72 games, and followed that up with 2 home runs and 7 RBIs in the World Series.

Interesting note about Fisk’s famous footage of him willing the ball fair: The
camera man was supposed to follow the ball, but distracted by a rat (!) he left the camera on Fisk, thus creating an indelible image. Since then, camera operators are instructed to follow the player rather than the ball.

Fisk was at the center of some legendary Red Sox-Yankee brawls, including one where he beat up both Thurman Munson and Gene Michael, and one where he knocked down Lou Pinella after the latter had bowled him over at the plate.

Despite being one of the best catchers in the game, Fisk felt he was underpaid by the Red Sox, and lobbied for more. He became a free agent in 1980 after the Red Sox GM, Heywood Sullivan, sent his contract a day late. Signing with the other Sox (White), Fisk was the face of the franchise until his retirement 13 years later.

Although age did begin to catch up with him after that season, Fisk continued to put up solid power numbers. He even managed to catch over 100 games in both 1990 and 1991, despite being over 40. After breaking Bob Boone’s games caught record, Fisk got a motorcycle and addressed the hometown crowd. Despite his popularity in Chicago, owner Jerry Reinsdorf apparently really disliked Fisk, and he was released a few days later while on a road trip. He was also thrown out of the White Sox clubhouse later in the season, after he wished his former teammates luck in the playoffs.

As an indicator of his hard nosed, old-school attitude, he once told Deion Sanders after the latter had failed to run out a pop fly, “There is a right way and a wrong way to play this game. You're playing it the wrong way. And the rest of us don't like it. Someday, you're going to get this game shoved right down your throat.”

Elected to the hall of fame on the second ballot in 2000, other honors for Fisk post-retirement include the left field foul pole at Fenway park being renamed the “Fisk Foul Pole” (2005), and life-size statue unveiled later that year outside U.S. Cellular Field later that same year. Perhaps feeling guilty about those Copenhagen ads he cut in the 70s, Fisk has been a long time supporter of the Cancer Support Center.

Unfortunately, Fisk has been in the news lately for a less honorable reason as he was found passed out in a corn field with an empty bottle of vodka in his car. He pled guilty a few days ago to a DUI charge. 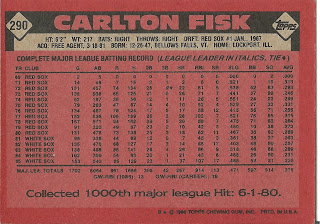