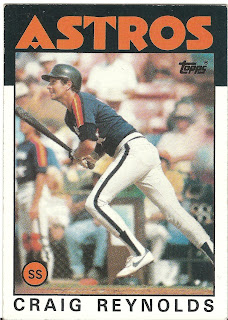 The player: Reynolds had an unusual batting stance, much like many Japanese players. He would have all of his weight on his front foot, and slap at the ball. This may have been a result for Reynolds overcompensating for vertigo. Despite this, he had a good eye and was a good triples hitter.

Drafted by the Pirates, Reynolds hit for a high average in the minors, but with absolutely no power. Now, there are two types of shortstops that (generally) make it to the majors: The flashy guy who has incredible range and arm, but will make his share of errors (think #72 Shawon Dunston). And then there is the steady guy, who may not have the range and arm of the flashy player, but will make fewer mistakes. Reynolds fell into the latter category.

With speedy Frank Tavarez manning short for the Pirates, Reynolds didn’t get much of a chance to break into the lineup. He got his big break when he was traded to the expansion Seattle Mariners for Grant Jackson. Reynolds played in the first ever Mariners game in 1977 and got 2 hits. The next season, he was hitting over .300 at the All Star break and was selected to the team. He set many career highs that season including hits (160), batting average (.292), and OPS (.710).

In a good trade for both teams, Reynolds was sent to the Astros in 1979 for #64 Floyd Bannister. He proceeded to lead the league in sacrifice hits (with an astonishing 34), and make his second straight All Star Game when a disgruntled #90 Garry Templeton refused to take part. Reynolds is the only player in history to play shortstop in consecutive All Star games with different leagues.

Perhaps his finest season came in the strike shortened 1981 campaign, when he tied a record on my 6th birthday by hitting three triples in one game. Reynolds would tie for the league lead with 12.

When #166 Dickie Thon became the everyday shortstop in 1982, Reynolds was relegated to backup duty in 1982 and 1983. But with the beaning of Thon in 1984, Reynolds was once again called on to start. With Thom missing lots of time in the next several seasons, Reynolds shared the position with him until 1987. With the arrival of #107 Rafael Ramirez in 1988, he spent his last two years as a utility infielder.

Reynolds is currently a pastor at a mega church outside of Houston. 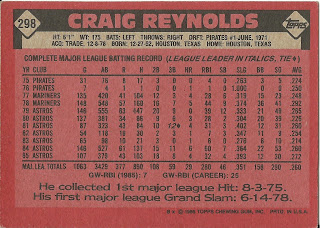 Rear guard: Reynolds' first hit was off a hall of famer Tom Seaver. He singled to left, but was out at second as left fielder John Milner prevented him from turning the single into a double.
Posted by Jets Break Jaws at 8:16 PM