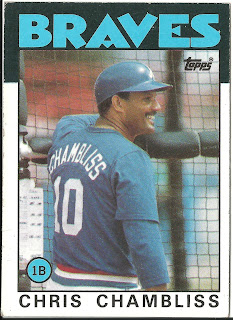 The player: Chambliss was considered a clubhouse leader when he played with the Braves. A good fielder at first despite throwing right (he batted left), he also had the ability to drive in runs, despite not being a spectacular power hitter.

As the first pick overall for the lowly Indians in 1970, Chambliss was basically assured a fast track to the majors. He immediately made an impact in the majors, winning the Rookie of the Year award the next season over a really weak crop of rookies (second place finisher Bill Parsons went 13-17 for the Brewers).

The Indians were really terrible in the early 70s, and Chambliss didn’t really get a chance to show what he could do. His liberation came with a trade to Yankees, that was really quite a steal for the Bronx Bombers. In exchange for Chambliss, pitcher Cecil Upshaw (3.02 ERA in relief in 1974), and Dick Tidrow (11-9 starting in ’74, several good years in relief after that), the Indians got four pitchers, only Tom Buskey being effective after the trade.

Chambliss became one of the core players of the dominant Yankee teams of the mid to late 70s.  From 1976-1978, he drove in over 90 runs each year, with a career high 96 driven in in 1976. That year, he also placed 5th in MVP voting and made his only all-star game.  Chambliss capped off his best season by giving the Yankees their first pennant in over 10 years by hitting a walk-off homer off Royals pitcher Mark Little in the ALCS. This got a little dicey as the fans mobbed the field, knocking Chambliss over. He probably never touched home plate.

After a trade after the 1979 season, Chambliss was a Blue Jay for a month, and then moved on to the Braves. Two players (#45 Damaso Garcia and #119 Barry Bonnell) already covered on this blog were involved in those transactions. Chambliss was still an effective hitter as grew older as a Brave. Since he now played his home games at the “Launching Pad” (Fulton County Stadium), his power improved. Chambliss hit a career high 20 home runs in 1982, and tied that number the next year.

Chambliss’ last year as a regular first baseman was in 1984 where he hit 9 home runs, drove in 47, and hit .247. With Bob Horner moving to first base in 1985, he was relegated to the bench. As a pinch hitter the next two seasons, Chambliss was much more effective in that role in 1986 when he hit .294. 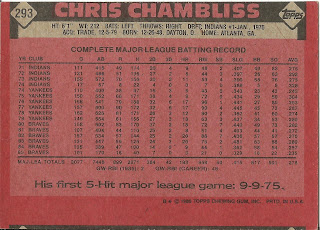 Rear guard: First the obvious--the card is horribly miscut. But strangely enough, only on the back.

Chambliss' five hits were four singles and a double. He scored twice: Once on a sacrifice fly by shortstop Jim Mason, and again on a Rick Bladt single. Chambliss drove in three guys with hits: Roy White, Graig Nettles, and Thurman Munson.
Posted by Jets Break Jaws at 9:58 PM

He was escorted back to touch the plate later, only to find it gone.

Here's a good first-person account of the play. http://espn.go.com/blog/new-york/yankees/post/_/id/11296/chris-chambliss-remembers-his-walk-off-hr