Another 100 cards down! Carlton Fisk has surpassed Steve Yeager as the most popular post, despite being only a month old. This is what happens when a post closely follows a news story about a player (in this case, Fisk's DUI). 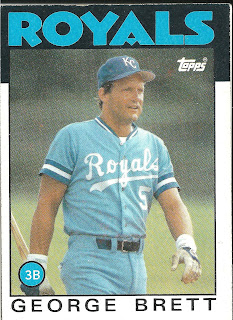 Card thoughts: The last “100” card was also a Hall of Fame, third baseman.

The player: Brett is perhaps the best third baseman I’ve ever seen play. More of an all-around player than Schmidt, Brett was a gap hitter that ranked in the top ten in every offensive category one time or another in his career. He came from good genes: All of his brothers played pro ball.

With such a long and storied career, it might be best to carve it into 5 or so year chunks.

1973-1977: Drafted as a shortstop, Brett was moved to third and was named the starting third baseman in 1974, more as a testament to his strong arm and range than his bat. Struggling at the all-star break that season, he turned to hitting coach Charlie Lau who rebuilt his swing. He ended up hitting .282 and was third in rookie of the year voting.

Hitting third in the lineup, Brett showed great gap power in 1975 and 1976, leading the league both years in hits and triples. In 1976, George Brett, teammate Hal McRae and opponents Lyman Bostock and Rod Carew were all within percentage points of each other for the batting crown on the last day of the season. Each could have won it in that game, but Brett went 2 for 4, his last hit an inside the park home run. McRae was up next and grounded out. He had won the title by .001 points. Against the Yankees that year in the ALCS, he hit .444.

1982-1986: This era started with the famous pine tar incident. In a game at Yankee Stadium, Brett hit what appeared to be a go ahead home run off Goose Gossage. However, manager Billy Martin complained that the pine tar on Brett’s bat was above the allowed amount. He was called out, the home run invalidated, and the win given to the Yankees. Brett went ballistic, and had to be restrained from decking home plate umpire Tim McClellan. Eventually, AL president Lee McPhail overruled the umpires, and the game was resumed at a later date (the Yankees lost). It was such a seminal moment in baseball history that Fleer made a card of it.

Brett finished with over 3,000 hits and is 6th all-time in doubles (665). He was voted to the hall of fame on the first ballot in 1999. Brett continues his long time association with the Royals, serving as their vice president. He tried to buy the Royals in 1998, but had to settle for owning minor league baseball and hockey teams. 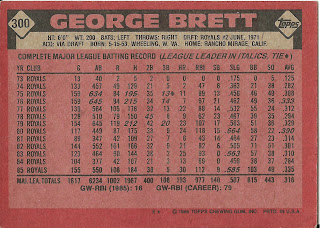 Rear guard: With all of Brett's accomplishments, he only hit over 30 home runs once in his career, and this card came out right after he's reached that mark.
Posted by Jets Break Jaws at 9:44 PM

This is one of the most memorable cards from the my first year collecting cards. The Brett is an iconic image for me.
Great post.