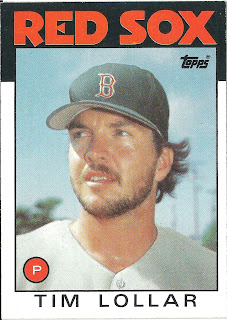 Card thoughts: The classic airbrushed pose by Topps, although it is a really good attempt, much better than the terrible airbrushing in the 60s and 70s. Maybe they started using Photoshop in 1985? I know this is airbrushed as this a spring training picture, and Lollar was with the White Sox then.

The player: Lollar was a rare two-way player who continued to hit well, even after he was made a full-time pitcher.

A fourth round draft pick out of the University of Arkansas, Lollar was assigned to AA West Haven, where he split time between first base and pitcher. He was a better hitter than pitcher, hitting .255. Lollar's ERA was 5.81. He played a bit more in the field the next year (122 at bats), but his hitting regressed as his pitching got better. From here on out, Lollar would be mainly a pitcher.

After a cup of coffee with the Yanks, he was traded to the Padres in the deal that sent #282 Jerry Mumphrey the other way. Lollar struggled as a swingman in 1981, but really came on strong in 1982. He made the top ten in wins (16), winning percentage (.640), and shutouts (2). But Lollar was also prone to lose concentration and hang his slider, leading to lots of home runs and walks.

Perhaps Lollar was just lucky in 1982, because he never had another winning season. He was terrible in 1983, despite being named the Opening Day starter (7-12, 4.61). Lollar improved a bit in 1984, but it may have been a case of a rising tide lifting all boats, as the Padres won the pennant that year. He was horrendous in the playoffs, as he couldn't make it out of the fourth inning in the NLCS, or the second inning in the World Series.

Disappointed in Lollar's inability to respond in high pressure situations, he was included with #103 Luis Salazar and #254 Ozzie Guillen in a package for White Sox pitcher LaMarr Hoyt. However, the walks began to pile up and he went a mere 3-8 for the White Sox before being shipped to the Red Sox in July for outfielder Reid Nichols.

The Red Sox tried turning him into a reliever, but he was pretty bad in that role too, sporting A 6.91 era in 1987. He was much better as a pinch hitter. Despite playing in a league with a designated hitter, Lollar batted for light hitting shortstops Jackie Gutierrez and Rey Quinones in two different games. He actually singled off #50 Dan Quisenberry in the second game to put the tying run on second base before Wade Boggs grounded out to end it.

A self-taught golfer, Lollar is now the head golf pro at Lakewood Country Club outside Denver. 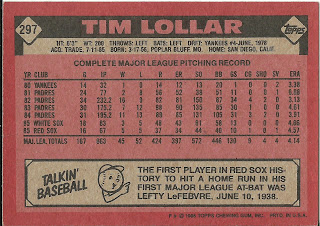 Rear guard: Lefty, whose real name was Bill, pitched in the major leagues from 1938-1939; and again from 1943-1944. His career won-loss record was 5-5. Lefty was a pretty good hitter, although his first home run was his last. He pinch hit a bunch of times and played first while with the Washington Senators in 1944 and hit .258. Quite appropriate that this factoid is on a Tim Lollar card, another two way player.
Posted by Jets Break Jaws at 10:26 AM