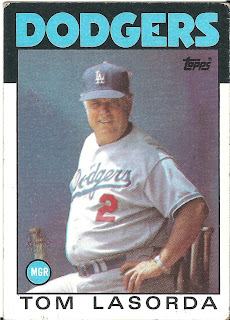 Card thoughts: Look at that gut! Not surprising that Tommy (not Tom) Lasorda started an Italian food business while he was managing. And look at that. Two hall of famers in a row!

The player/manager: Lasorda is one of those rare managers who was a pitcher. He barely pitched in the majors, going 0-4 in 3 seasons with the Dodgers and A’s. He did spend a considerable amount of time at AAA in the Dodgers system, however (going 110-63 in 11 seasons). Even as a player, he was chubby.

Lasorda started his coaching career with the Dodgers in the minors in the 60s, and was soon promoted to be the third base coach under legendary manager Walt Alston, then in his 20th year of managing the Dodgers. Lasorda, who was offered several other managerial jobs, turned them all down as he expected to succeed Alston when the latter retired, which he did in 1976.

Lasorda won the pennant in his first two Dodgers seasons (the first time in history that had been done by a first-time manager). In a famous moment in the 1977 series, Lasorda, who was miked, came out to remove pitcher Doug Rau, and ended up swearing a blue streak trying to get him off the mound.  After a couple of years missing the playoffs, he guided the Dodgers to a World Series win in 1981.

A great motivator, Lasorda always seemed to get the best out of his players, and he was especially good with rookies, as he managed nine rookie of the year winners. He tended to field the same lineup every day, but his in-game management was sometimes too focused on small ball.

In another great “blue” audio clip, Lasorda excoriated light-hitting Padre Kurt Bevacqua for accusing him for ordering #56 Tom Niedenfuer to throw at his teammate in 1982.

Lasorda’s Dodgers won the division in 1983 and ’85, but didn’t advance to the World Series again until 1988 when they won it all again, over a heavily favored A’s squad (an indelible vision from that series: Lasorda throwing his hands in the air and running onto the field after Kirk Gibson’s dramatic game ending home run).

He would win the division again in 1995, but never got back to the World Series. Lasorda suffered a heart attack in 1996, and left midway through the season, replaced by his one-time starting shortstop, Bill Russell.

With a .526 career winning percentage and 1,599 wins, Lasorda was selected for the hall of fame in 1997. Long considered one of baseball’s best ambassadors, Lasorda was selected to coach the gold-winning USA baseball team in the 2000 summer games.  His portrait hangs in the national gallery in Washington DC. 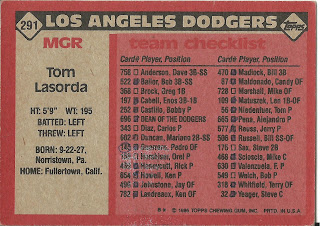 Rear guard: Big mystery: Why did I circle #145 Pedro Guerrero? Otherwise, the back of this card is a mess: Gum stains, ink stains, etc.

As for the players selected for cards, Jay Johnstone, who never even played the field and had only 15 at bats, probably should not been issued a card. Alejandro Pena on the pitching side is in the same boat, having only pitched in 2 games. Disgraced pitcher Steve Howe should have been included instead.
Posted by Jets Break Jaws at 10:58 AM