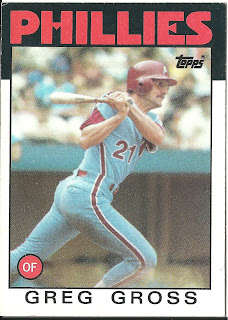 Card thoughts: This action shot is almost a mirror image of the one shown on Gross’ 1984 card. Also, for those with long memories, this is not a Garbage Pail Kid card (also manufactured by Topps). That is “Gross Greg.” For those still snickering, I remind you that "gross" means "large" in German, which is the etymology of Greg's surname.

The player: As an outfielder with absolutely no power and little strength (almost all of his hits were to the opposite field, and few went more than 250 feet), Gross’ usefulness was limited. But he made the most of his talent, playing good fundamental defense and becoming a valuable left-handed pinch hitter later in his career.

Gross peaked early. His rookie season (when he earned a Topps All Star Rookie card) was his best. He finished second in Rookie of the Year voting on the strength of his 185 hits, .314 average, and .393 on base percentage. As the leadoff hitter, Gross was expected to steal bases. However, he really only had average speed, which explains how he was only successful 37% of the time. His 20 times caught stealing set a rookie record.

Gross continued to be a valuable leadoff hitter the next two seasons with the Astros, as he always got on base at a good clip. But the fact that he had no power and no speed meant that he was essentially a two-tool player. Seeking a more well-rounded outfielder, the Astros sent him to the Cubs for Julio Gonzalez. When Gross left the Astros he still had not hit a home run.

With the Cubs, Gross began his long career as a fourth outfielder/pinch hitter. The Cubs had a solid outfield with Jose Cardenal, Bobby Murcer, and Rick Monday so there wasn’t room for him to start. But he probably should have started, as he hit .322 and even slugged a respectable .460 (he hit his first 5 home runs that season).

Gross spent one more year with the Cubs (card here) before being traded once again, this time to the team he would be most associated with, the Phillies. He thought he should be starter, but acknowledged the fact that the Phillies had stars at every position. Despite once again losing most of his power (he would only hit one more home run in his career, in 1987), Gross had finally found a home. Highlights include getting 3 pinch hits in 4 at bats in the 1980 NLCS and hitting .358 as a pinch hitter in 1982.  He also pitched twice in blowouts, striking out two Expos in 1986, and after relieving another position player in 1989 (#298 Craig Reynolds), he gave up three runs against the Pirates.

Gross finished his career with the Astros in 1989, where he struggled as a pinch hitter, hitting only .187 in that role. After sitting out the 1990 season, he attempted a comeback with the Padres, and then the Red Sox. Looking back on his career, Gross was realistic. “I’ve enjoyed my career, I really have,” he said. “ . . . I wanted to play every day, sure, but it didn’t work out for me. But I found that niche and it worked out. I’d rather have the longevity [than starting everyday].”

Gross worked in the minors as a hitting coach, and was the bench coach for the Phillies in 2001, and their hitting coach from 2002 to 2004, and again from 2010 up through this past season (he was not retained for 2013). There is a golf tournament named after him (the Greg Gross Open) that is held annually in Northbrook, IL. 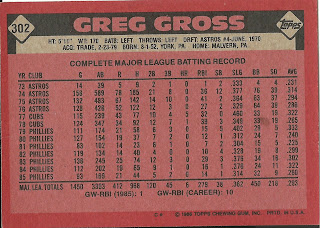 Rear guard: Gross had a typical season in 1985: Only 7 extra base hits in 169 at bats. His average was a little sub par (he had hit close to .300 his last 3 seasons), and his season ended in September when he broke his little finger.