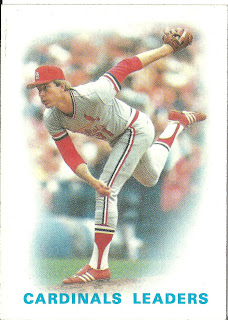 Card thoughts: When I think of the '85 Cardinals, all I can remember is how much I hated the Cubs playing against them. It seemed like every time a Cardinal got a single, it would turn into a double (or triple!). These pennant winners were fast. And that was lucky, because they had hardly any home run power.

The player: This is a much more exciting picture of Bob Forsch than on his regular baseball card. Forsch played all but 1 1/2 seasons in his 16-year career with the Cardinals. Tommy Herr was the second longest tenured Cardinal with a career that started in 1979. 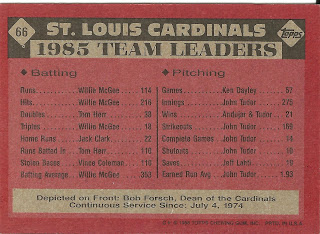 Rear guard: A look at the pennant-winning Cardinals' offensive statistics reveals a team with a profile from the late 1910s--lots of speed and singles, little power. Tommy Herr drove in 110 runs with only 8 home runs; Willie McGee's team leading 216 hits, 18 triples, and .353 led the league (and was good for an MVP award) and Vince Coleman's incredible 110 stolen bases was a rookie record and earned him the Rookie of the Year award.

The Cardinals also had a strong pitching staff with John Tudor, Joaquin Andujar, and Danny Cox each winning at least 18 games. Tudor came in second to Dwight Gooden in the Cy Young award voting. He would never have a year even close to the incredible year he had in 1985 again (his 10 shutouts led the league).
Posted by Jets Break Jaws at 9:48 PM