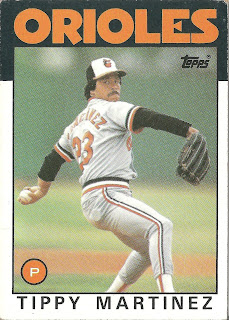 Card thoughts: For years, I thought Tippy was Dennis Martinez' brother. They played on the same team, kind of looked the same, and Martinez was a fairly uncommon name in the majors at the time. But I was wrong. I will say that I always thought it was cool when a ballplayer's nickname was used as his first name on a card, so I always liked this card. Especially since it nicely isolates Tippy's pitching motion, against a non-distracting blurred background.

The player: Tippy was unusual for his time, in that he only started two games in the majors, and rarely started in the minors. He may be one of the first "star" middle relievers. Martinez came to the Orioles in 1976 in a blockbuster deal where the Yankees were sent longtime Orioles catcher Elrod Hendricks, veteran ace Ken Holtzman, promising rookie pitcher Doyle Alexander, and reliever Grant Jackson for youngsters Martinez, catcher Rick Dempsey (started at catcher for the next decade or so), and pitcher Scott McGregor (138 wins for the Orioles). Rudy May was also included: He won 17 games the next year for the Orioles. Tippy had perhaps his best year the year the Orioles won the pennant in 1979, winning 10 games as a long reliever. He was bad in the World Series, however, where he was mainly used as a lefty specialist. The next year, Martinez began to close some games, a recorded double-digit save totals for the next five years.

Martinez redeemed his poor post-season performance in 1983 when the Orioles won the World Series. An all-star, Martinez went 9-3 with 21 saves. In the World Series, he didn't give up a run and saved 2 games. This was also the year Martinez got a win without ever retiring a batter at the plate, due to three pickoffs. It was the 10th inning, and Weaver must have done a really poor job of managing that day because he was out of position players. Lenn Sakata, normally an infielder, was catching and two outfielders were playing second and third. The Blue Jays were therefore eager to test Sakata. The man Martinez inherited on base, Barry Bonnell, was picked off by Tippy's first throw. The next batter, Dave Collins, walked. Collins was one of the fastest men in baseball at the time, but he also got picked off. Cecil Upshaw, the final batter in the inning, reached on an infield single and he was picked off as well. You can read about this and other memorable games in Martinez' career here.

By the time this card was issued, Martinez was nearing the end of his career. He would only pitch 20 more innings over two years with the Orioles and the Twins before hanging up his spikes in 1988. He did play the senior circuit for awhile and opened a taco stand at Camden Yards. 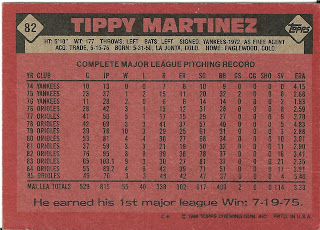 Rear guard: Wrong again Topps! Tippy's first major league win was 7-12-75 against the Twins. Martinez, likely the last man in the bullpen, pitched to one batter in the top of the 16th inning and got Steve Braun to ground out to first. The Yankees rallied to win the game in the bottom of the 16th.
Posted by Jets Break Jaws at 9:24 PM