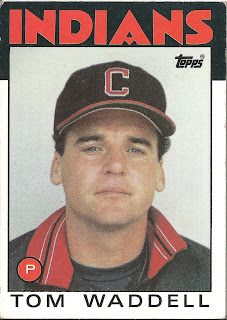 Card thoughts: I don't know what Tom Waddell did or who he did it too, but he doesn't seem very happy to be in this mug shot.

The player: Surprisingly, Waddell is one of only eight players born in Scotland to ever play in the majors. This Dundee native was drafted from the Braves by the Indians in 1983 in the minor league Rule V draft. He was a good reliever his rookie season, saving 6 games with a 3.06 ERA. He was converted into a starter in the latter part of the season represented by this card and went 4-1 in his 9 starts. Waddell blew out his shoulder at the end of the 1985, and was only able to pitch 3 more major league games in 1987 before having to retire. He does instructional videos now. 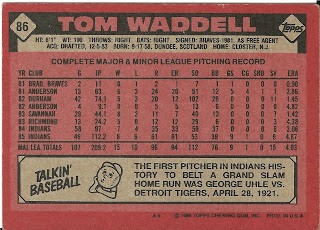 Rear guard: George Uhle "The Bull" was the ace of the Indians staffs in the 20s. He led the league twice in wins in that decade with 26 and 27 wins. He was a really good hitter as well, hitting .289 for his career, hitting over .300 six times in a 17 year career. The grand slam was his only home run in 1921 and was off of Dutch Leonard. He drove in 6 runs that day, a third of his total for that year.
Posted by Jets Break Jaws at 8:04 PM

'86 Topps has some of the strangest photos.