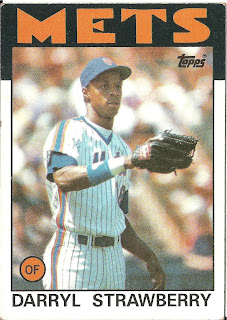 Card thoughts: This picture was taken at Shea Stadium of Strawberry warming up before the game. But when I think of Strawberry, I have the vision of his long form rocking back, lifting his right leg, ready to lace the ball into the outfield or over the fence. And of a certain chant.

The player: Strawberry had it all. He could run, throw, hit, steal bases, hit home runs. A five-tool player. 30-30 club member. 8 straight all-star games. Rookie of the Year (1982). #1 overall pick in 1980. But it all fell apart after age 30. Like all the 80s Mets, I hated Strawberry. I'll never forget how excited I was to be able to razz Strawberry with the eternal "Da-aryl, Da-aryl" when the Cubs played the Mets at Wrigley. Bart Simpson dug this chant too (Strawberry was one of Mr. Burns' softball ringers in "Homer At The Bat"). This card shows Strawberry in his prime. He hit over 20 home runs in his first 9 seasons when that was a big deal. In 1987, 1988, and 1990 he hit over 35 home runs and drove in over a 100 as a lynchpin for the perennial Met contending teams. Many of his home runs were monster blasts (or moon shots), like this one that hit the clock at old Busch Stadium, or this one that hit the roof at Olympic Stadium. He also came up big in the post-season. He hit 4 home runs and drove in 12 in 3 post-season series with the Mets. Like most of the Mets of that era, he was also known for off-the-field incidents. He got in fights with Wally Backman and Keith Hernandez, would sleep in late and miss team workouts, and generally acted like a boor. The Mets, tiring of his disruptive behavior, did not make a big play to resign him after the 1990 season, which ended up being a smart move. Strawberry decided to sign a lucrative 5-year contract with the Dodgers, his hometown team. His first season with the team he put up his customarily great numbers, and at this point in his career he had 280 home runs, and a seemingly sure path to the Hall-of-Fame.

But as he hit age 30, his production dropped alarmingly. The fast life Strawberry was living began to catch up to him. He began to get injured regularly and he only played 75 more games over the next two seasons with the Dodgers, while also battling drug and alcohol abuse. The Dodgers released him two years early from his contract, owing him 10 million dollars. Strawberry attempted a comeback with the Giants but could only get on the field for 29 games. George Steinbenner of the Yankees then took Strawberry on in 1996 as a reclamation project, after he was suspended for cocaine (although Strawberry once said on Letterman he could never see himself playing for George). He did well as a part time player, even hitting 24 home runs in 1998. But another set back occurred when he was diagnosed with colon cancer, which spread to his lymph nodes by 2000. The cancer diagnosis sent his life into a further tailspin. He was busted for drug violations several times, and reportedly lost his will to live. However, he did live and has rehabilitated himself. Always a well-spoken fellow, Strawberry has provided analysis after the Mets games since 2007. 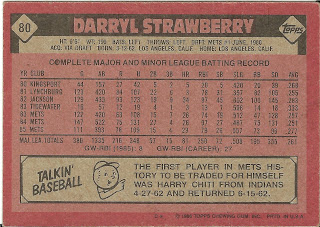 Rear guard: Harry Chiti happens to be the ONLY player in major league history traded for himself. Chiti hit .195 for the Mets in 15 games, so they sent him back to the Indians. He would never play another major league game.
Posted by Jets Break Jaws at 3:42 PM