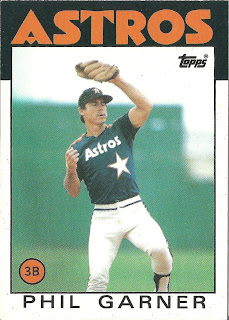 The player: Phil Garner was nicknamed "Scrap Iron" for his scrappy play and resemblance to this cartoon character. One of the better hitting second baseman in the 70s and early 80s, Garner drove in over 70 runs 4 times and generally scored over 60 runs a year which may not sound like much by today's standards, but in that lower scoring era it was enough to send Garner to the all-star game in 1976, 1980, and 1981. His best season was in 1977 with the Pirates when he scored 99 runs, hit 17 home runs, drove in 77, and had a fine .441 slugging percentage. The next year, he hit grand slams on consecutive days. But Garner's reputation with the Pirates was made in 1979 in the post season when he hit .417 in the NLCS and an incredible .500 in the World Series.

In 1981 he was traded to the Astros for second base prospect Johnny Ray (who would go on to have a very good career for the Bucs). He was shifted to third base in 1983 to make way for a very similar type of second baseman, Bill Doran. His post-season magic did not translate to the Astros: He hit .111 in the 1981 ALCS and .222 in 1986. After 70 games with the Dodgers in 1987 and 15 with the Giants, Garner retired, and started on his next career as a manager. He managed 7 years with the Brewers (where they began to play the National League-style ball that made them a natural fit when they shifted leagues in 1998); a bit more than 2 years with the Tigers, and 4 years with the Astros where he had his greatest success, leading the team to the playoffs his first two seasons, getting to the World Series in 2005 where they lost to the White Sox. 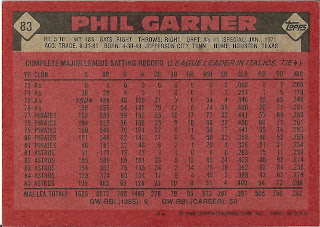