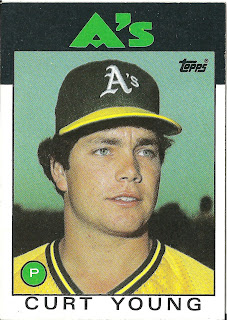 Card thoughts: Seeing this combination of A's colors always brings me back to seeing the old Madison Muskies, Oakland's A ball affiliate in the Midwest League. Other than that, Young looks like the grown-up singer of one of those 70s "family" bands.

The player: Young was one of the unheralded pitchers for the A's dynasty from 1988-1990. Overshadowed by such star starters as Dave Stewart and Bob Welch, Young won 13 games in both 1986 and 1987, although doubtless he was helped by the A's potent offense. He also pitched a one-hitter in each of those seasons against the Royals and White Sox. When the A's started their run of 3 straight pennants in 1988, Young contributed 11 wins. Although he was not in the A's post-season rotation, he pitched in 2 games without giving up an earned run. In 1989 when the A's won the World Series, he was left off the post-season roster due to his poor 5-9 record. He bounced back with a 9-6 mark the following year (and gave up no runs in one World Series appearance), but that would be his last as regular starter. He pitched mostly in relief his last 3 seasons, splitting time with the Yankees, Royals, and a last fling with the A's in 1993.

Young was the A's pitching coach from 2004 to 2010. He currently fills that capacity with the Boston Red Sox. 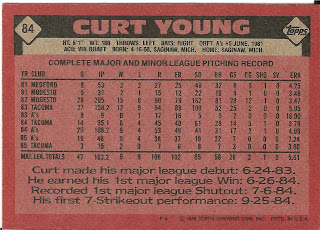 Rear guard: Young gave up only 2 hits and no runs in first win, beating the Royals #77 Charlie Liebrandt.
Posted by Jets Break Jaws at 10:03 PM