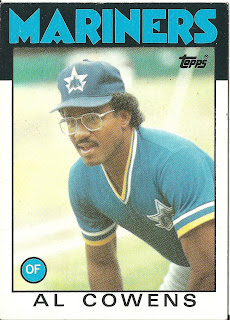 Card thoughts: This card always upset me as a kid. I could never figure out what Cowens was doing. This is more of a shot for a football card.

The player: Al Cowens had a fairly ordinary career. He had just enough speed and hitting ability to be an everyday player for the Royals, Angels, Tigers, and Mariners, but played without much distinction save one awesome season. In 1977, Cowens played in every game and hit 23 home runs, drove in 112 runs, and hit .312 with a .525 slugging percentage, coming in second to Rod Carew in the MVP voting despite not making the all-star team. He even won a gold glove. Cowens never matched that production in any other season. He didn't even reach double digits again in home runs until he was traded to the Mariners in 1982. In between, Cowens had a two year stint with the Tigers which was memorable, but not for Cowens baseball hitting ability. While with the Tigers, Cowens attacked White Sox pitcher Ed Farmer in retalliation for being hit by a pitch the previous season when he was still with the Royals. A warrant for assault was issued for his arrest in Illinois and Cowens had to leave town for the rest of the series. Farmer dropped the charge on condition that Cowens shake his hand. He was known as "Coward Cowens" at Comiskey for the rest of his career. 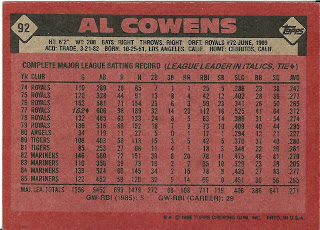 Rear guard: That extraordinary 1977 season really stands out when you line it up with all the other ones, especially the power numbers.
Posted by Jets Break Jaws at 10:23 PM