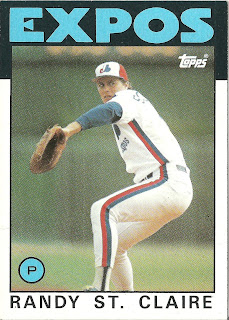 The player: St. Claire was a mediocre middle reliever who only pitched in 162 games in 9 seasons. He was generally kept as insurance at AAA for when a reliever would go down with an injury or be ineffectual. Only during the season shown on this card and 1987 could St. Claire be considered a regular reliever. The latter season was his best, when he pitched in 44 games for the Expos and had 7 saves and a 2.15 SO/BB ratio. He also pitched a bit with the Reds, Blue Jays, and Braves where he pitched in the 1991 World Series.

St. Claire is probably better known as a well-regarded pitching coach. He started in the minors immediately after his career was over, becoming the Expos coach in 2003. Fired by the Nationals (the team the Expos became in 2005) in 2009, he was hired by the Marlins the next season, which is the job he currently holds. 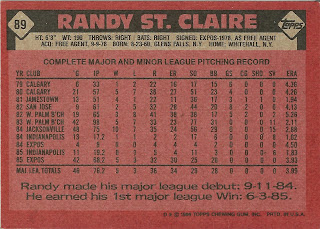 Rear guard: St. Claire's first win came after he pitched 4 innings at the end of a 15 inning game against the Giants. He also scored the winning run on a fielder's choice by Vance Law.
Posted by Jets Break Jaws at 9:35 PM