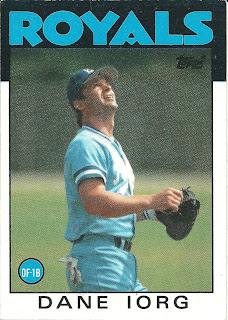 Card thoughts: A card that bothered me as a child, as all cards who featured a player with an unpronounceable last name. In my head, I always said “ee-org”. Apparently, it’s “orj”. Iorg also played first base only twice, so his position circle should simply be outfield.

The player: Iorg (who has a brother, Garth, who will be featured on this blog in the future), was a very effective pinch hitter for the Cardinals and the Royals for many years. He did play the field a bit, mainly at all outfield positions, but also occasionally at the corner infield spots.

A first round draft pick by the Phillies in 1968, Iorg generally hit over .300 in the minors, but didn’t exhibit much power. He was traded 12 games into his Phillie career for afro-sporting Bake McBride (who had several good seasons for the Phils) of the Cardinals. As a bench player, Iorg hit over .290 from 1979-1982. But he really showed his worth in the 1982 World Series where he hit an incredible .529 as the Cardinals’ DH.

But Iorg’s hitting began to drop off after 1982, and there was no place on the Cardinals for an aging outfielder who was no longer very useful in the field. He was sold to the Royals after starting the 1984 campaign hitting .143. His average went up to .255 for the Royals, and once again in the post season, Iorg got a hit every other at bat.

Although Iorg was coming off a .223 season when this card was issued, Iorg once again came up big time in the World Series, where he drove in the winning runs in Game 6 and once again hit .500 (it was his only hit in two pinch hit at bats). But the low average in the regular season encouraged the Royals to cuts ties with Iorg. After another ineffectual season on the bench for the Padres, Iorg retired.

Like players back then, when Iorg left baseball he had to get a job. He is now a lumber salesman in Utah and also runs a sports nutrition business. 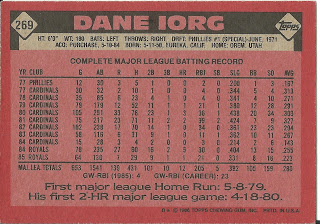 Rear guard: Iorg only hit 12 career home runs (and only 3 in 1980). Yet, showing that anything can happen in baseball, he belted two homers off Pirates starter Jim Bibby (both led off the inning). I guess Iorg took the fact that he was batting cleanup seriously.
Posted by Jets Break Jaws at 2:30 PM

To be fair, Iorg is pictured with a first basemen's mitt.

And I always pronounced his name EYE-OR-GAH. They should just print baseball cards phonetically. =)