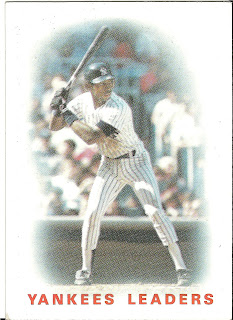 Card thoughts: Since the Yankees weren't really consistent division winners in this era in baseball history, I didn't really hate them like I (and I'm sure many of you) do now. They were more hapless. However, this season the Yankees won 97 games and finished 2nd to the Blue Jays, only 2 games back.

The player: If Ron Guidry had come up earlier in 1976, he'd be on the front of this card. 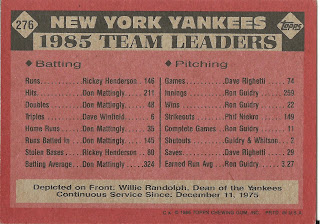 Rear guard: Despite the dominance of #180 Don Mattingly (the AL MVP) on the leader board, Rickey Henderson was the most valuable Yankee, according to WAR. The 211 hits, 146 runs, 48 doubles, 145 runs batted in, and 80 steals all led the league.

As for pitchers, Ron Guidry's 22 wins led the league. But look at that team leading strikeout total: 146 by Phil Neikro. It's really rare these days to see that.
Posted by Jets Break Jaws at 8:47 PM