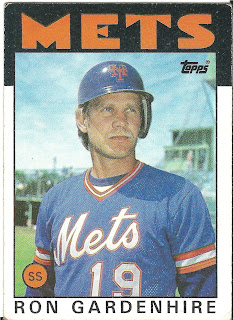 Card thoughts:  The fierce, determined, Viking look Gardenhire is sporting here is indictative of the fiery personality he shows as the manager of the Twins.  This is Gardenhire’s final card, and I remember being confused that both he and Rafael Santana had the sole shortstop positional designation. In my unsophisticated baseball mind at the time, I didn’t understand how two people could play the same position.

The player: Every team has a black hole at a position for a period of time, and for the Mets it was the shortstop position in the 1980s. The fact that the rest of the lineup were such mashers in the mid to late 80s disguised some of these very weak shortstops (Rafael Santana, Kevin Elster). In the early 80s, however, there was no hiding the poor play of the Mets shortstops (why they didn’t move Hubie Brooks there, I’ll never know).

This is just a long way of saying that Ron Gardenhire was supposed to be the shortstop of the future in 1982. But after a trial year in when Gardenhire hit .240 with a terrible .592 OPS (he was worth less than a replacement player), he was relegated to the minors in favor of a younger shortstop Jose Oquendo (only 19 at the time . . . he couldn’t hit a lick either but he was a better fielder). He remerged as a backup in 1984 where he was a erratic fielding shortstop with a poor bat to boot (his OPS in 74 games went down even further to .581).

For some unknown reason, he was given a card in this set, despite playing only 26 games in the majors and hitting .179. I suspect in a lot of cases, Topps used to make the determination early in spring training who they were going to use in the set, based on how much the player played the previous season (in order to not have to stress about getting marginal players in action). This was the reason they lost out on the rookie race to the more nimble Donruss and Fleer card companies.

This would be Gardenhire’s last Mets season, but more important to his future career, he landed with the Twins AAA club for one last pro season. The Twins connection landed him several minor league managing jobs in the organization and, most importantly, a long tenure as Tom Kelly’s third base coach.

When Kelly left after the 2001 season, Gardenhire stepped right in and was successful in guiding a small market franchise like the Twins to division titles in 6 of the first 9 years he managed them, going below .500 only once.  “Gardy” became a bit of a folk hero in Minneapolis-St. Paul, as much for his penchant of getting tossed from games as for his success on the field. With the turnover from one year to the next of players these days, his longtime reign as Twins manager made him the face of the franchise, which led him to make several goofy commercials (like this one and this one).

Unfortunately for Gardenhire, the last two seasons he managed have been abysmal, and he had the humiliation of having three of his long time coaches let go from under him this last season. His contract only runs until 2013, and I doubt he’ll be retained past that. 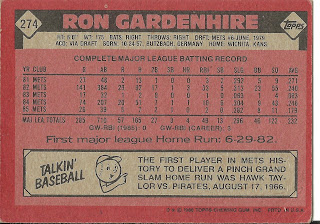 Rear guard: Gardenhire's first home run was hit off #106 Ray Burris and drove in #191 Wally Backman. It was the deciding run in the Mets 5-4 victory over the Expos.

I have never heard of Hawk Taylor, and I once gorged on the early history of the Mets when I was younger. He hit only 16 career home runs, in 1966 only 3 while hitting a meager .174.
Posted by Jets Break Jaws at 8:56 PM

One of my long time favorites, Rick Stelmasek, was one of the coaches fired.
Still, I interviewed and talked to Gardy several times over the last few years and he has always been great. He even invited us into his office once.

That is some good insight into why Topps lacked a lot of the rookie cards in the 80's. As far as moving Brooks to SS, the Mets seemed to prefer glove men at the position. They had guys like Brooks and HoJo who played both 3B and SS but they always wanted a smooth fielder. Althogh the Mets must have felt neither Brooks nor HoJo had the chops to last at SS, they probably would have been better off sacrficing some defense in favor of the offense.