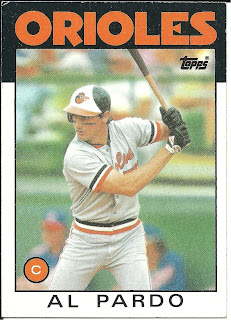 Card thoughts: This is Pardo’s rookie, and last, Topps card. While Topps was pretty shy about issuing rookie cards in this set for those rookies that had potential, they loved issuing cards of obscure third-string catchers.

The player: Al Pardo is one of only four players in major league history born in Spain (the others: Brian Oelkers, Danny Rios, and Al Cabrera). After a five-year minor league apprenticeship that showed flashes of power (he slugged over .450 at Bluefield, Hagerstown, and Rochester), the switch-hitting Pardo was called up for almost the entire month of July while backup catcher Joe Nolan was out with a chronic knee injury. Nolan would never come back, having chose to retire. But Pardo did not acquit himself well auditioning to be the backup catcher, hitting only .133 in 78 plate appearances. The Orioles were instead forced to lean heavily on the back of aging catcher Rick Dempsey, and playing Floyd Rayford out of position.

Pardo started the next season at Rochester, but was called up to replace Rayford in June. The results were nearly identical, as he struggled at the plate again, hitting a mere .137. However, Pardo did hit his only major league home run that year.

He was back to the minors for most of the rest of his career, popping up for brief appearances as the ends of the 1988 and 1989 seasons. Pardo also played internationally, both in Japan and Mexico, during his professional career. 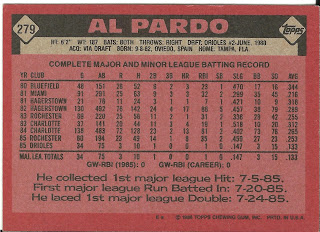 Rear guard: Pardo singled off Royals starter Mark Gubicza for hist first hit. He would later score on a fielders choice from Cal Ripken.  I think this is the first time a player's first RBI is mentioned on the backs of these cards.
Posted by Jets Break Jaws at 9:10 PM