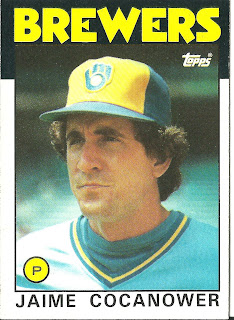 Card thoughts:  For years, I thought this guy’s first name was pronounced “Jay-me.” But seeing as how he was born in Puerto Rico (despite the non-Hispanic sounding last name), I guess it was always “Hi-may.” As for the picture, he seems concerned, which he should be, as this would be his second to last Topps card.

The player: Cocanower was raised Stateside and went to Baylor University. After a pitching well in the 1977 and 1978 College World Series, he signed with the Brewers, and was put on the major league squad but did not pitch.

For the 1980 season, Cocanower went 17-5 with a 2.18 ERA for the single-A Stockton Ports. For this effort, he was awarded the California League MVP award. It also encouraged the Brewers to fast track him to the majors. Unfortunately, skipping AA hardly helped Coconower, and he struggled for three seasons in AAA, always walking way more than he struck out, before being called up at the end of the 1983 season.

A 2-0 record and 1.80 ERA in 5 games (3 starts) fooled the Brewers once again that Coconower was a bonafide major league starter. But he had still not solved his wildness. Coconower went a terrible 8-16 in his only full major league season, 1984. The problem was a sub-1 strikeout to base on balls ratio.

Coconower continued to struggle with his control the season represented by this card (13 wild pitches, 73 walks in 116 1/3 innings), which led to him being bounced from the rotation. After only 44 or so innings in 1986, his major league career was finished. Coconower ended up with 201 walks as compared to 139 strikeouts. In no season, did he strikeout more than he walked (he was not much better in the minors . . . in his last pro season at AAA Albequerque, he walked 109 in 119 innings and struck out only 50). 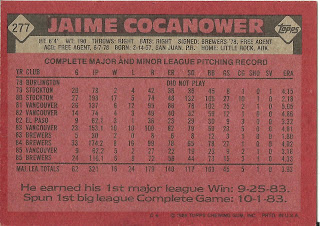 Rear guard: Most of Cocanower's glory came at the tail end of the 1983 season. His first complete game came against #270 Jack Morris and the Tigers. In a 10-1 blowout, Cocanower struck out 1, walked none, and gave up only 6 hits.
Posted by Jets Break Jaws at 11:54 AM