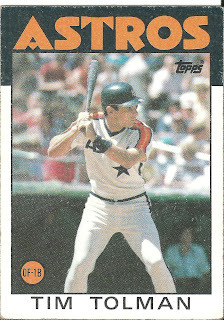 Card thoughts: At first glance, I thought this was Danny Heep’s card. There’s a lot of shots like this taken at Shea Stadium. This picture was taken July 27, when Tolman played in both ends of a double header, and didn’t get a hit. This is his final Topps card.

The players: Tim Tolman may be the worst major league hitter you’ll see in this set.  Despite career average of .168 and only 33 career hits, Tolman managed to play parts of seven consecutive seasons.

How did Tolman survive in the majors for so long? A glib answer would be that where today, every team carries a pitcher in the bullpen that really shouldn’t be pitching the majors, back in the 80s, it was usually a guy on the bench.

Because of his poor hitting, Tolman would spend most of the next several years at AAA. He would generally be brought up at the end of the season as a pinch hitter and defensive replacement (he never made an error in 140 major league chances), rarely averaging more than at bat per game played. After signing as a free agent with the Tigers in 1986, he played parts of two more seasons before retiring.

Tolman’s career in baseball has been much more successful as a coach and manager than as a player. He managed from 1991-1996 in the Astros system and also worked as a minor league instructor with the Indians. He finally got a major league coaching job with Washington as the third base coach for Manny Acta (whom he had actually managed in the minors) in 2007. Tolman followed Acta back to the Indians, where he was his bench coach (the traditional right-hand man of the manager). Diagnosed with Parkinson’s Disease, Tolman announced he was retiring from coaching in 2011. In the final game of the season, Acta got thrown out early on, leaving Tolman to manage his first, and only, major league game. There was rampant speculation that Acta got thrown out on purpose to give his friend a chance at managing in his last game. 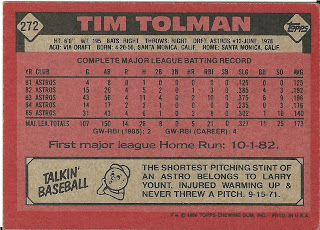 Rear guard: Wow, Topps took one look at these hitting "highlights" and had to dig deep for this first. Tolman's home run was a solo shot, and brought him above .200 with 2 games to go. Unfortunately, he would go 1 for 4 in the final game of the season, thus losing the chance to hit above .200 just once.

Larry Yount, brother of Robin, actually got credit for being in a game, as he was announced. But he never pitched to a batter and never got an at bat. And after the injury, he never got back to the majors. So his career stat line reads 1 game 0.0 inning pitched.
Posted by Jets Break Jaws at 8:47 PM

Tim Tolman. Wow. I don't know who that is and I don't recall seeing the card at all. And I have the complete set!

Great story about Acta and Tolman. As a kid I always got Tolman and Harry Spilman mixed up. I do remember when the Tigers picked him up that I was disappointed when I read his career stats.