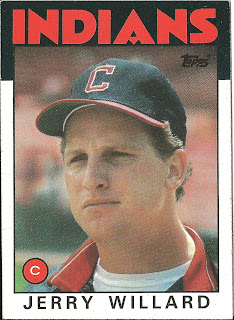 Card thoughts: I don’t know why, but Willard looks like a coach or manager rather than a player in this picture. Perhaps it’s the fact that his whole face fills the picture frame, a common pose for managers.

The player: I was surprised to see that Willard played several years after 1985 because I have no recollection of any subsequent cards of him being issued.

Two franchises squandered incredible farm systems in the early 80s by trading away good minor leaguers for washed up veterans: The Yankees and the Phillies. Willard was part of the Phillies system, and we was traded with a bunch of other players, including Julio Franco, for Von Hayes. Now, Hayes doesn’t quite fit into that category, but you gotta believe some other player could have been substituted.

Willard showed good power as a rookie catcher in 1984, as almost 20% of his 55 hits were home runs. For some reason, Willard started over Chris Bando, who had a better average and better power. However, the year this card was issued, the Indians decision was vindicated when Bando hit a pathetic .139, and Willard upped his average about 50 points to hit .270. But he was a bit of klutz behind the plate (he allowed the third most steals in the league, despite only catching 96 games), so the Indians released him at the end of spring training in 1986.

Willard was signed a few days later by the A’s, and he had his best season that year, despite being a backup. His OPS of .740 was good when you consider that he spent half his games in the cavernous Oakland Colliseum. But 1986 would be the last season that Willard spent any significant time in the majors. With the emergence of Terry Steinbach, there was no room for him in the majors and he spent most of the next year in minors.

Out of baseball in 1988 (he took a construction job), Willard latched on to the White Sox, with whom he appeared in 3 games in 1990. He had memorable stint with the Braves the following year. Although he had spent most of the season in the minors, the Braves decided they needed another left-handed batter off the bench. In Game 4, Willard drove in the winning run with a sacrifice fly.

Despite hitting .348 in 23 at bats (mostly as a pinch hitter), the Braves had both Damon Berryhill and youngster Francisco Cabrera (like Willard, destined to rise from catching obscurity to be World Series hero) as backup catchers, he was released and signed by the Expos.

Willard also played a few games with the Mariners before his catching career ended in a freak accident when one of the guys he was once traded with, Julio Franco, fouled a ball back, crushing his shoulder. He was never able to throw again, and now that little flap catchers wear on their shoulder to protect against this kind of injury is colloquially referred to as a “Willard.” 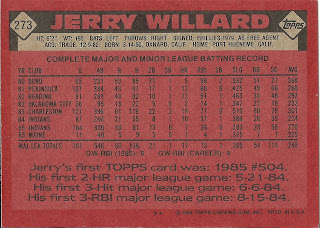 Rear guard: Wow that curly hair on Willard's rookie card is totally not evident on this one.

For a short career to this point, that's a lot of highlights! Willard's two homer game was off future Hall of Fame member Dennis Eckersley when he was a starter for the Red Sox.

once again aces for the write up,,my 2 cents on willie,,,they had the 91 braves alumni in 2011 reunion and about 95% team shows up ,,no jerry,,,,,,understandable on lonnie smith but really jerry why ?