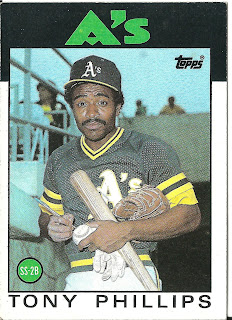 Card thoughts: I love the picture on this card. Phillips looks like he's just been caught getting out of the shower, or stealing a cookie. Instead, he's signing an autograph for a fan, likely in the stands to his right. I also like the fact that he's got everything a hitter needs in his arms: a ball, a bat, batting gloves, and a glove. Maybe he's signing all these things?

The player: Phillips started his career as a pretty good utility infielder who could play multiple positions well and hit for a decent average. After he was signed as a free agent by the Tigers in the winter of 1989, his career really took off and became one of the American League's best leadoff hitters, while still playing many different positions (he was a regular third baseman and outfielder but played many other positions as well). Phillips led the league in runs with 114 in 1992, walks with 132 in 1993 and 125 in 1996. Although never selected for the all-star team, Phillips scored over 90 runs for 5 straight years and over 90 walks 7 times including 6 years in a row. In two World Series with the A's, Phillips played second base and hit .235 with 1 home run, and 3 runs scored and driven in. He got a ring with the A's in 1989.

Later in his career, Phillips had some off the field issues. While with the White Sox in 1996 he jumped into the stands after a fan at Milwaukee County Stadium and punched him after the fan yelled racial slurs at him. After the game, he went after the fan again, shoving him (both were arrested). Then the next year while with the Angels, he got caught smoking crack. 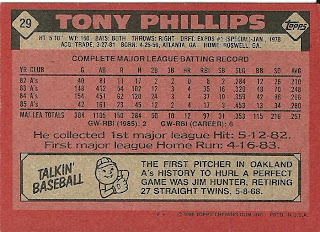 Rear guard: Another miscut card! Jim Hunter may be better known by his nickname "Catfish." He's now in the Hall of Fame. Tony Phillips' first home run was against the Seattle Mariners' Matt Young (who was Phillips' teammate on the 1989 World Series winning A's). He went 3 for 4 in that game and played shortstop.
Posted by Jets Break Jaws at 8:12 PM