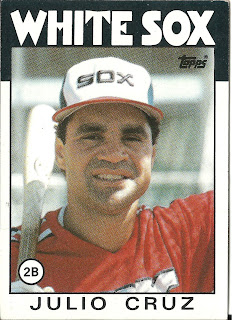 Card fact: Julio Cruz would have only one more Topps card after this one.

Card thoughts: Cruz has got a nice smile. Can't say the same for the White Sox uniforms. Red was a really bad choice for the warm up jersey.

The player: Cruz was one of the early stars for the Seattle Mariners, and was taken by them as the 52nd pick in the expansion draft from the California Angels. He was a singles hitter with blazing speed, and stole over 40 bases per year from 1978-1983. His all-time Mariners record of 290 steals was broken by Ichiro Suzuki in 2008. He was traded to the White Sox for fellow 2nd baseman Tony Bernazard and helped the Sox win the division that year. He currently broadcasts for the Mariners. 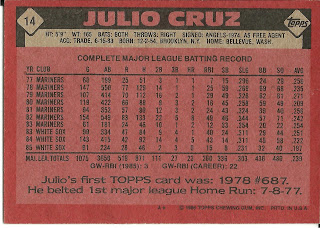 Rear guard: You can view that first Topps card here. Always a poor hitter, Cruz' average began a free fall after 1983, including this year when he only hit .197 (!) as the primary 2nd baseman for the White Sox. Inconceivably, he would start again the following (and his last year) when his average didn't improve by much and his career ended.
Posted by Jets Break Jaws at 10:11 PM