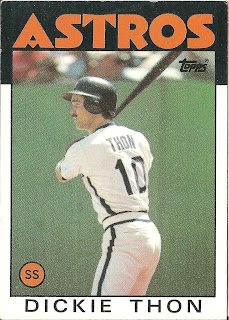 Card thoughts: We used to make fun of this card as a kid, for obvious reasons. I feel kind of bad about it now, seeing Thon was attempting to come back from a horrible beaning.

The player: With a name like Dickie Thon, you'd assume he was American, but he actually is Puerto Rican. As a young man, Thon was a five-tool player as good as Cal Ripken or Robin Yount. He came up with the Angels in 1979, he never filled more than a utility role for them and was traded to the Astros for pitcher Ken Forsch. In 1982, Thon was handed the starting shortstop position, and led the league in triples with 10, to go along with 37 stolen bases. The next season was his breakout year. Thon made the all star team and hit 20 home runs and 79 runs batted in. But the next season, Thon was beaned by Mike Torrez five games into the season, which permanently damaged his right eye. A detailed account of that incident can be found here.

Thon came back the next season, but he was the never the same after the beaning. He was decent in the field, but no longer hit. The vision problems Thon continued to have forced him onto the disabled list for much of his remaining years with the Astros. He did have one more season in when his stats were similar to those before he was beaned. Thon hit 15 home runs and drove in 60 runs in 1989. The next two seasons, he managed to stay on the field most of the time and got his share of hits and RBIs. After stops in Texas and Milwaukee, Thon was forced to retire after the 1993 season due to vision problems. What might have been. 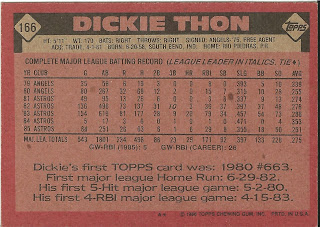 Rear guard: Thon's first Topps card was one of those future star cards. Of the other players Thon shared a card with, Ralph Botting only pitched 18 games in two seasons and had a career 7.39 ERA; and Bob Clark has a card in this set, but was never a star.

I remember when the Thon beaning happened. If not for it, we'd probably talk about him as a Hall of Famer these days, or at least one of the great SS's of the 80's and possibly 90's.