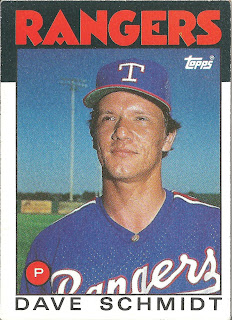 Card thoughts: Pity the poor middle reliever. I have absolutely no recollection of this player. Other than that, there's a lot a seriously off-kilter stuff going on with this card.

The player: Schmidt started out as a reliever and spot starter for the Rangers, getting 12 saves in 1984. After a trade to the White Sox for infielder Scott Fletcher (in 1986) and his subsequent release the next year, Schmidt hooked up with the Orioles and became a pretty good occasional starter and long reliever for some very bad teams. His best year was 1987 when he went 10-4 in 14 starts (out of 35 games) and had a 3.77 ERA. He was actually the Orioles opening day starter two years later, based on the fact he was the only starter with a winning record during a miserable 1988 campaign. Being number one didn't agree with him, however, and he had a high 5.69 ERA with 10 wins against 14 losses. He pitched a few more seasons after that with the Expos and Mariners before retiring. He has held various minor league pitching positions with the Orioles since 2005. 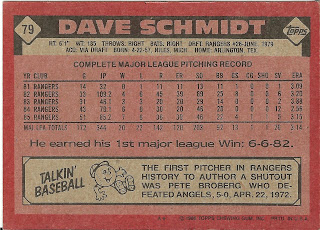 Rear guard: Schmidt came in the June 6, 1982 game in relief of Doc Medich who had allowed a single to White Sox batter Tom Paciorek and a walk to Harold Baines to start the inning. Schmidt promptly threw Carlton Fisk's attempted sacrifice bunt away down the first base line allowing both Paciorek and Baines to score and Fisk to go to third. Later in the inning Bill Almon hit a sacrifice fly, scoring Fisk. This gave the White Sox the lead; but when the Rangers came back in the 7th and 8th innings, Schmidt got quite the ignoble first major league win.

Pete Broberg was the first overall pick of the Washington Senators in 1971. He went directly to the majors, but did not record a shutout until the following season when the team had moved to Texas. Broberg was an incredibly wild major league pitcher and only had 6 career shutouts to go with a bloated 4.56 career ERA. He walked 5 in that shutout and struck out only 2 in front of a measly 5,000 fans.
Posted by Jets Break Jaws at 10:47 PM