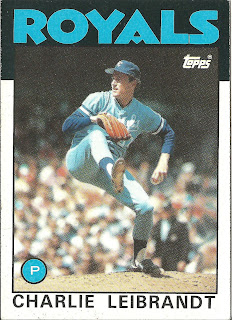 Card thoughts: These in-action cards of pitchers are probably the best cards in this set, simply because the pitcher's motion is the most unique in the game, especially when seen from the side. Liebrant looks like he's about to throw a curve.

The player: Liebrandt was a good pitcher for some very good Royals and Braves teams in the late 80s and early 90s, but never got much recognition. The season shown on this card was Liebrandt's first big season. He won 17 games for the world champion Royals. In what became a habit for Liebrandt (it had happened the year before in the ALCS as well), Liebrandt pitched a great game until the late innings when either he, or a reliever, blew the game. In this case, he led 2-0 in the ninth, ended up giving up 4 runs to the Cardinals after he tired. After 1986, Liebrandt won 14, 16, and 13 games for the Royals in subsequent years. But at age 32, he had a sub .500 record, winning only 5 games against 13 losses with a career high 5.14 ERA. Thinking he was washed up, the Royals traded him to the Braves for a song (actually, first baseman Gerald Perry).

With the Braves, his career revived and he won 15 games for them in 1991 and 1992. But Bobby Cox misused him twice in the World Series, putting him in as a reliever in a extra inning, tie game. He lost both of these games. Liebrandt ended almost a third of his seasons in the post-season, accomplishing a 1-7 record, despite a 3.77 ERA. 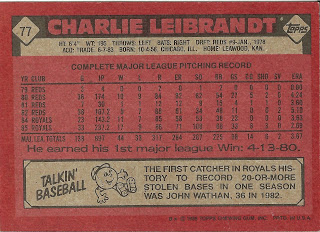 Rear guard: 1982 was John Wathan's only year as the Royals starting catcher. He was generally a reserve first baseman/outfielder/designated hitter for the team. His 36 steals are actually a single season record for a catcher in the 20th century; hall of famer Buck Ewing holds the all-time mark with 53 for the New York Giants in 1888.

Liebrandt's first major league win was a 5-hit shutout against the Braves, outdueling future hall of famer Phil Niekro for a 5-0 victory.
Posted by Jets Break Jaws at 6:15 PM