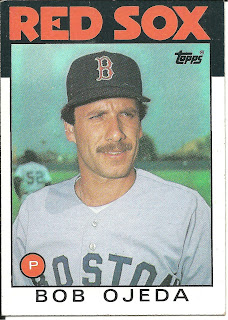 Card fact: The blurry player with #52 behind Ojeda is not a Red Sox player. Looks like a Yankee. Could it be Juan Espino?

Card thoughts: This is the first of many mustaches in this set (rare to see them on ball players anymore). It really does make you look older. Ojeda is only 28 in this picture and he looks about 40. This would be his last card in Red Sox uniform. He'd be traded to the Mets the next year for future Red Sox (and Cub) goat Calvin Schiraldi.

The player: Ojeda was a decent left hander for the Red Sox, but had his best year for a great (and loathed by my 11 year old self) 1986 Mets team, leading the league in winning percentage and winning 18 games. He was instrumental in the Mets World Series victory against his former team, winning a crucial Game 3 at Fenway. He was traded to the Dodgers for Hubie Brooks in 1990, and had one more good season with them, winning 12 games in 1991. He finished his career as a bit player with the Indians and Yankees.

Ojeda also was involved in some off-field incidents involving heavy drinking. He and Rick Aguilera, Tim Tuefel, and Ron Darling were arrested after brawling with security guards at a nightclub in Houston in 1986. More tragically, during spring training with the Indians in 1993 a drunken Tim Crews was piloting a boat with Ojeda and Steve Olin on board when the boat crashed into a pier. Only Ojeda survived, although he had severe head lacerations. 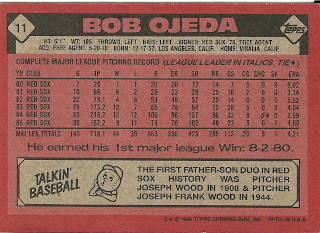 Rear guard: Look at those stats from 1984. A .500 record with a fairly high ERA, yet Ojeda tied for the league lead in shutouts. He must have given up lots of runs in his losses. Smokey Joe Wood was a great pitcher for the Red Sox, winning 34 games in 1912. He later became an outfielder. His son only pitched in 3 games for the Red Sox, losing 1.
Posted by Jets Break Jaws at 11:11 PM