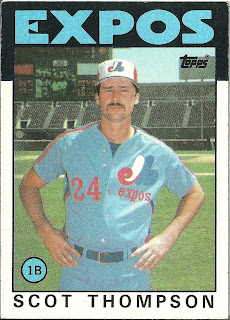 Card thoughts: First a Garry with two Rs and now a Scot missing a T. Thompson was traded mideason in 1986, so Topps didn't have time to get a fancy shot. This has got to be one of the West Coast parks. Maybe Jack Murphy stadium?

The player: Scot Thompson was a sweet swinging left-handed batter compared to Billy Williams while in the minors with the Cubs. But although he had a nice stroke, he had trouble making authoritative contact with the ball. In his only season as a regular player in 1979 he drove in only 29 runs in 346 at bats. The next season. he sustained a concussion the next season, which effected his ability to play regularly. He was mostly used as a pinch hitter the rest of his career. He had seasons when he hit over .300; he had others, where he hit below .200. In the season shown on this card Thompson was traded by the Giants for #65 Dan Driessen, in an unusual trade swapping pinch hitting first basemen. He finished his 8-year career with only 5 home runs and a .328 slugging percentage. 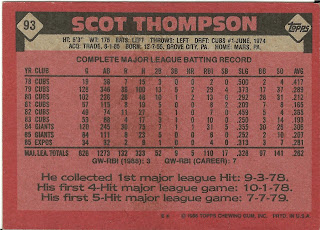 Rear guard: All 5 hits against the Astros by Thompson were singles; he drove in 2 runs.
Posted by Jets Break Jaws at 8:02 PM