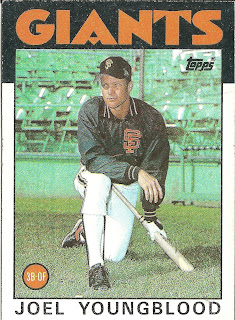 Card thoughts: Another classic Topps pose for a batter, albeit Youngblood looks like he’s kneeling in a dirty aquarium. He’s in an almost identical position on his 1984 Topps card.

Youngblood was only an outfielder this season. He only got into one game at third. Perhaps these position circles are “aspirational.”
The player: Youngblood is one of those players common in baseball: The super-sub who can play several positions and can hit well, but whose versatility is too valuable for managers to waste making them a regular at any one position. Youngblood was constantly frustrated that he never became a regular player. He ended up playing most of his career in right or left field, but also played a significant amount of time at second and third.
Youngblood broke in with the Reds in 1976 as a pinch hitter, and hit a poor .193 in that role. Not finding a place for Youngblood’s bat in the powerful Reds lineup, they shipped him to the Cardinals for pitcher Bill Caudill; then the Cardinals shipped him after 20 some games to the Mets for infielder Mike Phillips.
This was the break Youngblood was looking for. Although he still wasn’t a regular at any one position, manager Joe Torre (who retired as a player to clear roster space for Youngblood) showed a lot of confidence in Youngblood, and the next year he got 266 at bats playing left, right, center, second, and third. In 1979, Youngblood would have a career year. He got into 158 games, mostly in the outfield filling in for rightfielder Elliot Maddox (jammed his foot) and left fielder Steve Henderson (also injured). In those games, Youngblood scored 90 runs on 162 hits and even hit 16 home runs and drove in 60. Even though Youngblood showed good speed, he was not very wise on the basepaths, stealing 18 but being caught 13 times. The Mets gave Youngblood a starting role in centerfield as a reward for that season (and a three year contract worth $900,000) and moved Lee Mazzilli to first base in 1980. At the 3:23 mark in this video, you can see Youngblood robbing a home run from a Cub on opening day that year. Although he drove in a career high 69 runs, the power from the year before disappeared and he became a singles hitter.
Youngblood was on his way to having a career year in 1981 before the players strike, hitting .350. On the strength of that average, he was named to his only all star game after play resumed in August. But soon after that, Youngblood badly injured his knee and was out for the season. The next year, increasingly disgruntled at his reserve role, he demanded a trade. The Mets accommodated him after a day game at Wrigley Field on August 4, 1982. Youngblood had a single and drove in 2 runs against hall of fame pitcher Fergie Jenkins. After the game, he was traded to the Expos who were playing a night game in Philadelphia. Youngblood raced to Philly in time to get a pinch hit for the team against another hall of fame pitcher, #120 Steve Carlton. This made him the first player to get a hit for two different teams on the same day.
This would be the highlight of Youngblood’s brief, 40 game career with the Expos. The next year he was with the Giants, where he played mostly second his first year with the team, and had a career high 17 home runs and .292 average. At long last, in 1984, Youngblood finally realized his goal of being an everyday player, as the Giants started him at third for most of the year. While his hitting was adequate, his fielding was erratic as he led the league in errors with 36 and had a poor .887 fielding percentage (in fact, Youngblood was only a consistent fielder in the outfield—at third, his career fielding percentage was .896, and at second it was .954). It was back to a Giants’ utility role for him from 1985-1988, where he generally hit about .250 with little power. 1989 was his last major league season and it was with the Reds, where he hit .212.

For a long time, Youngblood was a jack of all trades with a startup software company, selling and marketing the product to various companies. In the meantime, he managed in the minors for Kane County, an Orioles affiliate. Youngblood also worked as a coach for the Reds, Brewers, and Diamondbacks. He’s currently the Minor League Outfield and Baserunning Coordinator for the Arizona Diamondbacks. 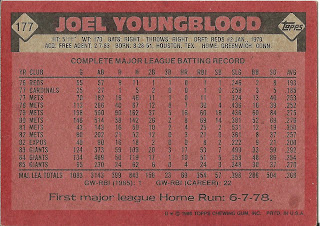 Rear guard: Youngblood's first home run was off the Dodgers' Burt Hooten in the 4th inning. It was a solo shot.

This date in baseball history:   In 1953, the St Louis Browns were blocked from moving to Milwaukee because the minor league team that was there objected. Curiously, the Browns were allowed to move to Baltimore, even though it was close to a major league city, Washington.
Posted by Jets Break Jaws at 9:54 AM