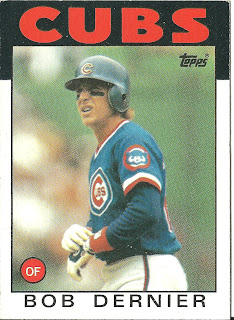 Card thoughts: "Was that a double, or a single and an error?"

The player: I had always considered Dernier to be kind of a star player. But he’s really a perfect example of one player riding on the coattails of the player hitting ahead of him, in this case, Ryne Sandberg.
Dernier’s calling card was speed. He stole over 70 bases twice in the minors and in his 1982 rookie season he stole over 40 bases, even though he was in a platoon with Gary Maddox in center field. Dernier was nicknamed “White Lightning” (a somewhat derogatory moniker, as it assumed all fast players must be black) and “The Deer” for his speed. He was in a platoon again in 1983, but lost playing time in the other outfield spots to Greg Gross, who hit .302 to his .232.
Dernier's sophmore slump had the Phillies rethinking that he was going to be their centerfielder of the future. They were more excited about newcomer Von Hayes, who was younger than Dernier and who was a better hitter. Without a spot on the club, he was offered to new Cubs (and former Phillies) GM Dallas Green, who ripped off the Phillies once again by getting Dernier and Gary Mathews for journeyman reliever #187 Bill Campbell and a pitcher who never made it. With Ryne Sandberg having an MVP season hitting ahead of him, Dernier scored over 90 runs, hit .278, and a gold glove in center. The two were nicknamed “The Daily Double.” In the playoffs that year, he hit .235 and scored 5 runs.
The season shown on this card was not quite as good for Dernier or the Cubs. The Daily Double’s numbers both dropped and Dernier battled injuries on the way to scoring only 63 runs. Further regression of his numbers followed the next season, but he had a revival in 1987, hitting over .300 in 97 games.
This would be his last season as regular. Dernier’s old team, the Phillies, hired him on as a reserve outfielder for two seasons, and he retired in 1989. He was the minor league outfield and base running coordinator for the Cubs from 2007-2010. Dernier took over as first base coach in 2011, but was fired along with most of Mike Quade’s staff after the season. 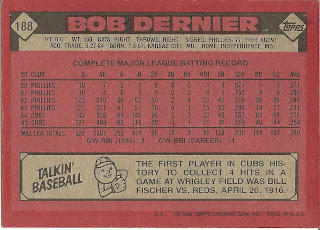 Rear guard: There were many previous Cubs who had had 4 hits in their home park. Keep in mind, that Wrigley Field was only two years old at that point, and it was the first season the Cubs had played there (the Chicago Whales, a federal league franchise, were the original tenants). Bill Fischer was a most forgettable Cub, having only logged one season and 68 games for the team (he had played in Wrigley the year before, however, as a member of the Whales).
Fischer only hit .196 as the backup catcher in 1916, and was traded in July to the Pirates for another light hitting catcher, Art Wilson, and backup utility man Otto Knabe. Fischer only had 301 hits in his 5 year career.
This date in baseball history: The first known use of the nickname "The Cubs" is used in a 1902 headline referring to the Chicago National League ball club. The team was formerly known as the Orphans, the Colts, and the White Stockings.
Posted by Jets Break Jaws at 7:29 PM

Dernier is my all-time favorite player.

He was recently interviewed during a Phillies Spring Training game telecast and he mentioned he plays golf on a regular basis with his good friend Sarge Matthews.