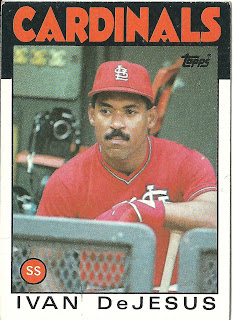 Card thoughts: Another sea of red, with a nice, Groucho Marx-style mustache. The position circle should read 3B-SS. This would be De Jesus’ last Topps card.

The player: De Jesus was one of the better all-around shortstops in the league in the late 70s, but he is better remembered as the player involved in the trade that brought Ryne Sandberg to the Cubs.
As a young prospect in the Dodgers system in the mid 70s, De Jesus found himself blocked by Bill Russell. Although he had the potential to be a better all-around shortstop than Russell, the Dodgers were impatient, and made a very poor trade. Along with Bill Buckner (who became a minor star with the Cubs), the Dodgers sent De Jesus to the Cubs for Rick Monday, who never really hit again, and Mike Garman, who had one good season out the Dodgers bullpen.
With the Cubs, De Jesus was installed in the leadoff spot and was a productive hitter on several terrible teams. From 1977-1979, he scored over 90 runs each year, with a league leading 104 scored in 1978. De Jesus was a fast man, although not always that successful stealing, stole almost 100 bases in those years. De Jesus also showed great range and arm strength at short, solidifying a position for the Cubs that had been filled by light hitting Mick Kelleher after Don Kessinger left in 1976.
After 1980, De Jesus’ hitting began to decline, although his fielding remained strong. In 1981, he was atrocious, winning the “negative triple crown:” Having the least home runs (0), runs batted in (13), and average (.194) of any regular player (note that this was only over 108 games in a strike shortened season). The Philadelphia Phillies chose to think the previous four seasons were more indicative of his ability as they pursued De Jesus. The Phillies were concerned that their long time shortstop Larry Bowa was getting too old to handle the position, and they needed someone more athletic to play the deep short required on the artificial turf. Dallas Green, the Cubs general manager and the former manager of the Phillies, agreed to a deal, but only if a little regarded third base prospect named Ryne Sandberg was included. The rest is history.
With the Phillies, De Jesus still played a lot of games and handled a lot of chances at short, but he became the prototypical light hitting middle infielder. His average never rose above .260 in the three seasons he spent as the Phils’ regular shortstop, and he rarely hit a home run. Feeling a young Steve Jeltz was ready to take over the position, they traded De Jesus and #112 Bill Campbell to the Cardinals for #39 Dave Rucker at the end of spring training in 1985.
This was a curious move, as the Cardinals already had a long time star shortstop, Ozzie Smith manning the position. But the Cards envisioned De Jesus as a pinch hitter/runner and late inning defensive replacement (for Ozzie Smith? Were they crazy?). He mostly backed up Terry Pendleton at third, although out of the 59 games he played, only 33 were spent in the field at any position.
The next three years, De Jesus spent most of his time as an insurance policy at AAA for the Yankees, Giants, and Tigers. For a player who spent most of his career playing nearly every game, he would end his time playing less than 10 games for each of these clubs.
After his playing days were over, De Jesus became a coach and manager in the Dodgers, Mariners, Astros, and Cubs minor league systems. In 2010 and 2011, De Jesus finally became a major league coach for managers Lou Pinella and Mike Quade. Cubs fans will not miss De Jesus’ terrible third base coaching during the 2011 season. 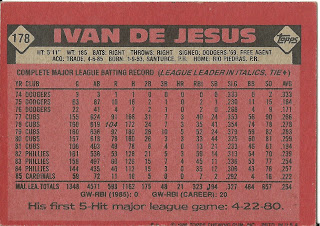 Rear guard: One of the weird cards that has a miscut back, but the front is fine.
De Jesus had 160 hits in 1980. 5 of those hits came in a 16-12 slugfest against the Cardinals. As a leadoff man, De Jesus hit for the cycle (which would be a better Topps citation). Amazingly, he hit for the cycle entirely off starting pitcher Bob Forsch (Forsch gave up 14 hits and 9 runs that day). Teammate Barry Foote, who never hit much in the majors, had the day of his life with 8 RBIs.
This day in baseball history: Marvin Miller, former official in the United Steelworkers Union, is elected as the first president of the baseball players union in 1966.
Posted by Jets Break Jaws at 10:47 PM