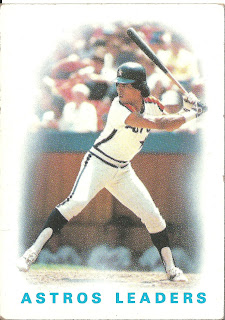 Card thoughts: The Astros finished 3rd in 1985, ending up with a 83-79 record. The next season, with many of the same players, they would win the Western Division.

The player: Jose Cruz ended up playing 2 more seasons with the Astros. He started his Astros career with a bang, going 3 for 4 and hitting a 3 run home run off hall of fame pitcher Phil Neikro in the Astros 6-2 win against the Braves opening day, 1975.
The current dean of the Astros is Wandy Rodriguez with 7 seasons. 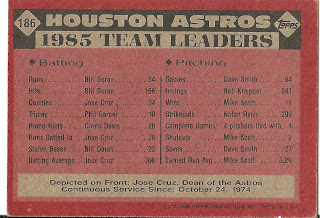 Rear guard:  Of the Astros league leaders on the offensive side, Jose Cruz ranked fifth in the league in doubles and Phil Garner was 4th in league in triples. On the pitching side, Dave Smith was in the top 10 in games pitched and saves; Mike Scott was 6th in wins; and Nolan Ryan, of course, was 3rd in strikeouts.

This date in baseball history: In their first ever meeting, the Mets beat the Yankees in a spring training game 4-3 in 1962.
Posted by Jets Break Jaws at 10:03 PM