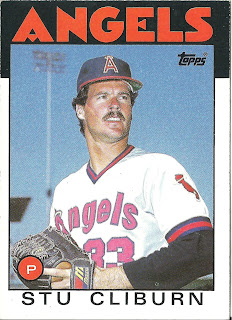 Card thoughts: I call these pictures “heroic” shots. Not that Cliburn was ever much of a hero.But this is his rookie card.

The player: Cliburn was already the subject of a “Talkin’ Baseball” feature on the back of the #124 Luis Sanchez card. His twin brother, Stan Cliburn, also made the majors.
Cliburn took forever to get to the majors. He was drafted in 1977 by the Pirates, but didn’t make it to the majors until 1984 (and then only for 1 game). This was due to his consistently high ERAs in the high minors. The Pirates certainly gave up on him: After trying him as a starter in the minors, they released him in 1982. He hooked up with the Angels, who converted him to a short reliever where he was much more effective.
The year represented by this card is the peak for Cliburn’s brief, 3 year career. As a 28-year old rookie, he won 9 games, saved 6, and had a great 2.03 ERA coming out of the bullpen. On the strength of this performance, he placed 5th in the Rookie of the Year balloting. But then injuries limited Cliburn to only a handful of minor league games the next two seasons. He finally came all the way back in 1988, but was much less effective, with his ERA almost double his 1985 mark. The culprit was too many home runs allowed: 11 in 84 innings.
Cliburn never pitched in the majors after this season, as he continued battling injuries. He currently is a pitching instructor in the Twins minor league system. 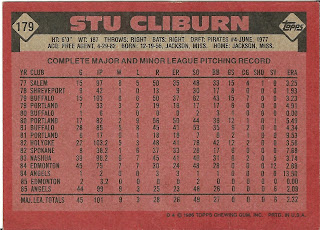 Rear guard: Cliburn spent so long in the minors, there wasn't room to put any facts.

This date in baseball history: The first use of a designated hitter occurs in a spring training game in 1973. The batter is Larry Hisle of the Twins.
Posted by Jets Break Jaws at 9:40 PM