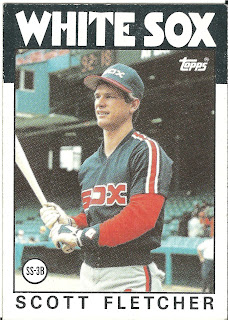 Card thoughts: Another picture a Tiger Stadium, although this one’s a bit more interesting than the others, as you can clearly see the scoreboard, and I guess the press box, behind Fletcher (although the press box seems pretty far down the line). The time says: 92:18?

The player: Fletcher was the rare player who was involved in a trade between the Cubs and their southside rivals the White Sox. There have been only 6 trades between the teams in the last 20 years. He also holds the distinction of being drafted first by three different organizations (A’s, Astros and Cubs).

An excellent minor league shortstop, Fletcher was blocked by #178 Ivan De Jesus with the Cubs. After two September callups, he was dealt to the White Sox for Steve Trout and Warren Brusstar. Fletcher established himself as the White Sox primary shortstop in 1984, and hit around .250 with little power but good speed. The emergence of Ozzie Guillen the next season shoved Fletcher back into a utility role.

Now expendable, he was traded to the Rangers, where he would have his best offensive seasons. In his first year with his new team, Fletcher hit a career high .300, and even had a strong .400 slugging percentage on the strength of his 34 doubles. He had another strong offensive season in 1987, establishing career highs in hits (169) and runs batted in (63). In 1988, his average remained high, but his power numbers slipped badly: Only 16% of his 142 hits were for extra bases.

But the Rangers lost their head, and signed Fletcher to the first annual deal worth more than $1 million in team history. There were other people enamored with him. Future president (then Rangers owner) George W. Bush named his dog after him (Spot Fetcher Bush).

The Rangers soon regretted their decision (no word on whether Bush ever had any regrets on the dog’s name), and Fletcher was gone by the mid-season to following year. This may be one of the worst trades in Rangers history, as future all stars Sammy Sosa and Wilson Alvarez came along to the White Sox for a washed up Harold Baines and a never was Fred Manrique. Fletcher moved back into a starting role, this time as a second baseman. In his first full year back with the Sox, he got into 151 games, the second most in his career, but could only manage a .242 average and 56 RBIs. The next season was the worst of his career, as he struggled with the bat all season, hitting only .206, eventually losing his starting job to Joey Cora.

Fletcher would have two more seasons as a regular second baseman, one each with the Brewers and Red Sox. In both cases, Fletcher had his typical season: Decent average, little power, double digits in steals. He did hit over 30 doubles with the Red Sox in 1993, probably due to the presence of the Green Monster.

After two more seasons as a backup (with the Red Sox and Tigers), Fletcher retired in 1995. Bill James rates him as one of the top 200 shortstops of all time, although he implies that Fletcher was little more than a lineup filler. He currently serves as the assistant hitting coach to former teammate #123 Greg Walker on the Atlanta Braves. 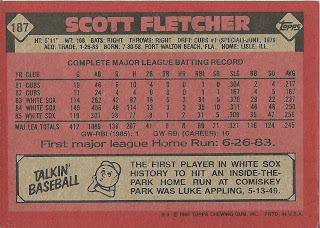 Rear guard: Fletcher's first home run came in 100-degree heat against the Twins; Fletcher also drove in three runs and had a single and a triple as well.

I always get Luke Appling mixed up with Luis Aparacio. Like Aparacio, Appling made the Hall of Fame as a shortstop with the White Sox. Appling had only 45 career home runs, but boy, could he hit. I find it amazing that it took 46 years for a White Sox player to hit an inside the park home run at Comiskey, considering how fast the White Sox teams generally were. Here's Luke Appling's 1950 Bowman card.

This date in baseball history: Tryouts are granted to Terris McDuffie and Dave Thomas, both black, at Ebbets Field, home of the Dodgers, as the first indication that the baseball color line was weakening.
Posted by Jets Break Jaws at 9:53 PM

In Graig Nettles' autobiography, "Balls," I seem to remember he makes fun of Fletcher for not using swear words (due to his faith). He yells something like "It's the big leagues, you're allowed to curse."

That time must be a countdown to game time.