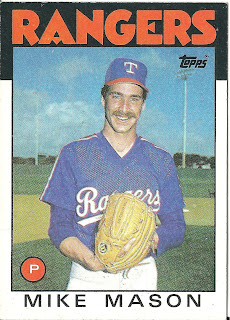 Card thoughts: I find Mason’s smile extremely dopey and a little creepy. Also, the perspective of the picture makes his glove look way too big, compared to his head. Mason's picture in the 1986 set is almost the same.
The player:  Mike Mason was a first round draft pick of the Rangers, so they must have seen something in him. Unfortunately, he never showed it in the majors.
Mason had an unspectactular minor league career before making it to the majors for brief spells in 1982 and 1983. His rookie season was his best. Mason went 9-13, but had a career high 113 strikeouts in 184 plus innings. His ERA was also a career low 3.61. You know you’ve had a mediocre career when, in your best season, you didn’t even have a winning percentage above .500.
The season shown on this card was much worse for Mason. His 15 losses were 7th in the league and his ERA rocketed to 4.83. Mason righted the ship the next year, going 7-3 with a 4.33 ERA. But after a 5.56 ERA to start the 1987 season, he was shipped to the Cubs in May for Dave Pavlas, a pitcher who never even made the majors with the Rangers (however, the Cubs liked Pavlas so much, they bought him back from the Rangers three years later).
Mason was just as terrible for the Cubs, as he went 4-1 but with a terrible 5.68 ERA. He pitched 6 2/3 more innings for the Twins the next season before leaving the majors for good.
Inarguably, Mason has had a much bigger impact as an ex-player on baseball. Almost immediately after ending his baseball career, he began his second career as a minor league pitching coach with stops in Appleton, Memphis, Springfield, Lansing, Wichita, Scranton, and Des Moines. Mason is the current Iowa Cubs pitching coach. I guess in this case the old adage is true: Those who can’t do, teach. 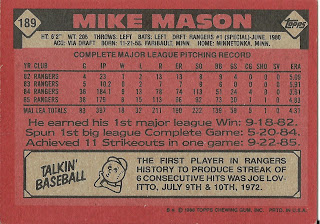 Rear guard: A paltry 6,000 fans saw Mason shut out the Mariners while striking out 11. He gave up only 6 hits, none of them for extra bases.
Joe Lovitto, a former 1st round draft pick, only hit .224 in 1972 (his rookie year), and after his 6 straight hits, he was only hitting .212. Lovitto would only have 165 hits over a four year career, never more than 100 in any season. Here's his card from that year. And, woah, does Lovitto look like a weird dude! A lot of chin!
This date in baseball history: In one of the all time greatest hoax stories, George Plimpton wrote a fictitious article in Sports Illustrated about a pitcher who could throw 168 mph. Several Mets were quoted, which lent credence to the story. The cover date was April 1, 1985.
Posted by Jets Break Jaws at 9:12 PM