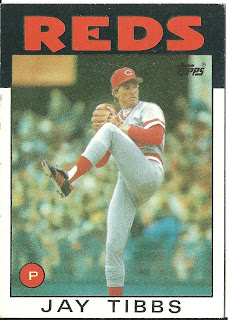 Card thoughts: Nice high leg kick. I wonder if he had a problem preventing steals?
The player: Tibbs was highly regarded young pitcher for the Mets. He had good stuff, but failed to control it. His first few seasons in the Mets system, he bounced from level to level, never dominating any. Tibbs finally turned it around in 1983 for Lynchburg, the Mets High-A club. He won 14 games for a very strong club that also featured a young Dwight Gooden. This was enough to temp the Reds into trading for Tibbs the next year.
He made his debut in 1984, and had his best season, going 6-2 with a 2.86. This was enough to get him penciled in as the #2 starter for the season shown on this card, but it was disaster in the early going. Tibbs went 4-11 and walked way too many batters before being sent to minors. Upon his return to the Reds, he had a much better 6-5 record. Tibbs’ 16 losses were 3rd in the league.
The Expos looked on the bright side of things (his success later in the season), and traded their #1 starter Bruce Gullickson to get him, Dann Billardello, John Stuper, and #133 Andy McGaffigan to add depth to their rotation. Tibbs ended up having two middling years with the Expos, reaching a career high with 117 strikeouts in 1986. He was again traded in a multi-player deal to the Orioles in February in 1988.
Tibbs’ first season with the Orioles was probably his worst, as he was on the leader board for losses (15). His ERA was a bloated 5.39, and he lost his spot in the rotation. Tibbs’ 9 straight losses that year were then an Orioles record. Injuries the next year limited him to 10 starts but he pitched well, winning all his decisions and having a fine 2.82 ERA. But another year ineffectiveness and wildness occurred the following season, and Tibbs was exiled to the Pirates in September where he ended his career. 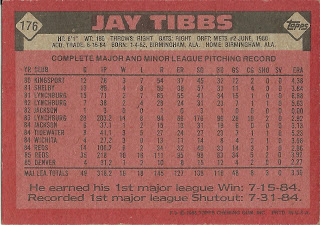 Rear guard: Tibbs pitched a fine game for his first win, giving up only 2 earned runs in 7 2/3 innings. However, as a foreshadowing of his career, he also walked 4 without striking out anyone.
This date in baseball history: Mickey Mantle announces his retirement in 1969.
Posted by Jets Break Jaws at 11:55 AM