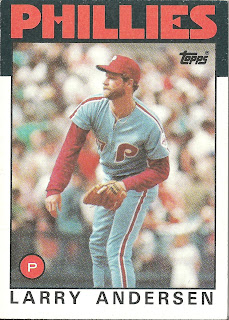 Card thoughts: I’ll say it again: Powder blue and maroon do NOT go together.

The player:  Larry Andersen was one of those pitchers who took forever to get going. Signing with the Indians at 18, he got a couple of brief looks with the major league club in 1975, 1977, and 1979. It wasn’t until 1981 (and at age of 28!) that Andersen spent the majority of the year in the majors.
Seattle was the team that liberated Andersen for the Indians’ minor league purgatory, and with the help of a devastating slider, he went 3-3 with a 2.66 ERA. In 1982, he was not as good, yet set a record having had no decisions in 79 2/3 innings pitched.
The Phillies “bought” Andersen in 1983 and he had some up and down seasons as a very durable middle reliever until 1986, when he was released after a poor start in May.
The Astros quickly snatched him up and he had his best seasons with that club, winning 22 games and saving 20 with a 2.57 ERA from 1986-1990. As evidence of his increasing effectiveness as he aged, Andersen had career low ERAs of 1.54 and 1.79 in consecutive seasons when he was 36 and 37.
It was the latter season which led to Andersen being involved in one of the worst deals in baseball history. Desperate to win the division, the Red Sox parted with top prospect Jeff Bagwell to “rent” him for 23 innings down the stretch in 1990. Although Andersen performed well (1.23 ERA and a 0.955 WHIP), Bagwell would go on to win the Rookie of the Year in 1991, and hit 449 home runs and score and drive in over 1,000 runs, all with the Astros.
And Andersen? He just kept plugging away until age 41, with 2 seasons in San Diego, and 2 more seasons back with the Phillies, where he pitched (albeit poorly) in the World Series for a second time. Andersen had ERAs below 3 in two of those years.
For 17 years, Andersen pitched in the majors: If he had pitched continuously from his debut in 1975, it would have been 20. He finished with a 40-39 record, a 3.14 ERA, and 49 saves.
After retirement as a player, Andersen coached for awhile in the minors, and then became the Phillies very colorful color man, known for his “Shallow Thoughts.” Here he is (the second voice) complaining about Ryan Howard’s ejection a couple of years ago. 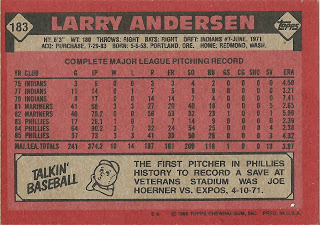 Rear guard: A save at Veteran's Stadium? Pretty obscure! The April 10th game was the first Phillies' win at their new home stadium (their former home, Shibe Park, had previously hosted the Philadelphia Athletics, and was built in 1909). Hoerner went 1 2/3 of an inning in relief of winning starter Jim Bunning. He walked one and struck out 2. Hoerner had 99 saves in his 14 year career, mostly in the late 60s with the Cardinals. Here's his card from that season. Hoerner looks a little sickly!
Posted by Jets Break Jaws at 8:56 PM