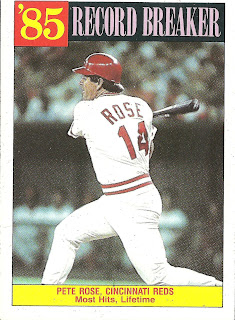 Card thoughts: Two aging Reds in a row. This picture was likely sourced from a news organization which managed to get Rose right when he got his tie-breaking hit. I say this because a Topps night action picture is rare. I think they used to issue them in the 70s when they had those World Series cards.

The record: . . . should have made Rose a shoo-in for the hall of fame. But he gambled it away. If Ichiro had been playing here since he was a teenager, perhaps he would have had a shot at the record. I'd say this record is not insurmountable: most hitting records aren't these days. 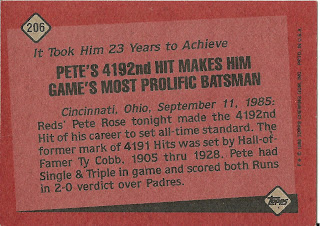 Rear guard: Some say that Eric Show never got over the fact that he gave up the record-breaking hit, and it ultimately led to his premature death after years of drug abuse.

This date in baseball history: Roscoe Barnes, shortstop for the Chicago White Stockings, hits the first home run in National League history in 1876. Barnes also grew up in my hometown, and played on the local team when it was in the National Association.
Posted by Jets Break Jaws at 10:49 PM

I'm not disputing what you wrote about Show, because I've read the same thing. However, why would giving up a hit send him into a spiral?

Realistically someone was going to give up that hit and it's not as if it cost him a game, much less a particularly important game (like Eckersley or Mitch Williams or even Mo Rivera).

If that sent Show crashing, I'm not sure he was psychologically ready for competitive sports.

I agree. I believe Show already had drug and emotional problems by this point. A more accurate assessment would be that it was just one more bad occurance which added to his latent inferiority complex. Of course, the poster boy for the one pitch sending a pitcher into a death spiral would have to be Donnie Moore (to be discussed in a later post)

There were issues with Show during the 1984 season when he revealed that he was a member of the John Birch Society. I can't recall the specifics but I remember there being a mini-controversy over it.

But Show had problems long before the Rose hit. An excellent article about him can be found here:
http://sports.espn.go.com/espn/otl/news/story?id=5543839

How much is card worth