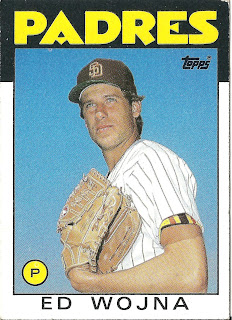 Card thoughts: Wojna is pronounced “Who-hee-na,” which in Polish means “war.” Seeing this card again, I kept on hearing in my head “Woe-jah-nah,” which must have meant I spent a lot of time in ’86 trying decide on what to make of his odd last name. But I’m not the only person who had trouble: Teammates #90 Garry Templeton and Marvelle Wynne would always call him “Wash-nuh.” Also:

-- Because of a production error 10 times the amount of this card was printed (making it QUITE invaluable, even though it is a rookie card)
-- Wojna is shot from almost the same angle as the player he was traded with,  #44 Lance McCullers

The player: Wojna was excellent in the minors for the Phillies, winning over 10 games in each of his three minor league seasons in their system. Traded to the Padres, he won 14 games for AAA Las Vegas in 1984. Since the Padres had an excellent starting staff in 1985 (held over from their 1984 division crown) there wasn’t much opportunity for Wojna to break into the rotation. They did give him 7 starts (among 15 overall appearances) mid-season when they sent down ineffective reliever Greg Booker. Even though Wojna walked few batters, he barely struck anyone out either, which led to a problematic 11.4 hits per nine innings and a 5.74 ERA. Part of the issue was that he was a very slow worker, which led to fielders not reacting as well as they should to balls hit to their right or left.

Wojna was very effective in limited duty the next season, once again starting 7 games but sporting a lower ERA (3.23) and a 2-2 record. He still was giving up more than a base runner per inning, but not as much as the previous season. Apparently, the main difference was that he began to pitch quicker and inside on more batters. In 1987, however, Wojna’s season was terrible as he lost all 3 of his starts, and once again had a high ERA.

He was traded after the season to the White Sox, with whom he would never play a major league game. Wojna was traded once again the following year to the Indians. He would pitch his final 33 innings there, over 5 games including 3 starts. Wojna went out well. In his final game in 1989, he pitched 5 innings in long relief of Rod Nichols without giving up a run. 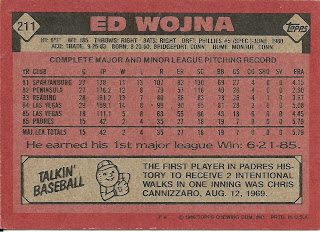 Rear guard: Wojna's first win was a gem, as he went 6 innings, giving up only one run against the Giants. However, he walked 4 against only 2 strikeouts.

Two intentional walks in one inning is pretty impressive, and very confusing. Those 2 walks were the only ones issued by Cubs starter Ferguson Jerkins, who shut out the Padres in that game. How can a batter come up twice in an inning, without the team scoring a run? The answer is, that statistic is wrong. Cannizzaro recieved two intentional walks alright, but it was in the 2nd and 4th innings. I still don't know why Fergie was walking him, when he was the 7th place hitter. Oh well, here's Canizzaro's card from that year.

This date in baseball history: How times have changed in baseball. Racist, Nazi sympathizer (they weren't neo-Nazi's back then) Ben Chapman, a Yankee first baseman, continuously harasses a Jewish fan of the team, including giving the "Sieg Heil" salute in 1934. Chapman was just as obnoxious several years later when, as manager of the Phillies, he vigorously protested Jackie Robinson breaking the color line.
Posted by Jets Break Jaws at 12:00 AM

I guess Chapman's beaning was karma.

That was Ray Chapman.