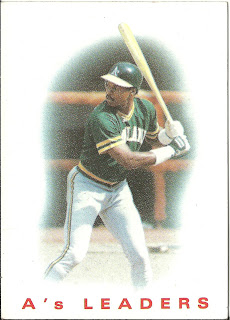 The player: Dwayne Murphy has already been featured on this blog (#8, the first non Pete Rose card in the set). He must have grown a mustache in the meantime, because he is clean shaven on his base card. In his first game with the A’s, Murphy acted as a defensive replacement for Miguel Dilone in left field after Gary Alexander had pinch hit for him in the 7th inning. Murphy would get one at bat and flew out to centerfield against Angels pitcher Dave LaRoche.

The current dean of the A’s is catcher Kurt Suzuki (5 years). 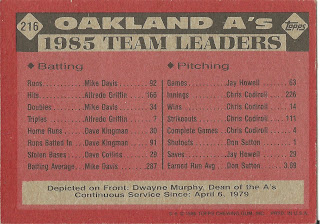 Rear guard: Only Curt Young would be a part of the A’s dynasty that would begin just a few years later. One thing that stands out is Mike Davis. This was definitely a career year for him, and he would never appear as a team leader again. The other is Chris Codirolli. Although he was the top A’s pitcher, I have no recollection of him, or his card.

This date in baseball history: Joe Sewell strikes out twice in a game against the White Sox in 1930. This is important because Sewell would only strike out 1 other time in 353 at bats that season, an almost unimaginable feat today.
Posted by Jets Break Jaws at 5:40 PM

What's weird is that Don Sutton is said to be the A's team leader for ERA, but his 1986 card shows him pitching for the Angels.

Is he the only person who is a team leader but doesn't have a card showing him with that team?

Sutton was traded by Oakland to the Angels late in the season, on September 10. At the time of the trade he had pitched 194.1 innings. I'm not sure what amount of innings Topps used as the cutoff to qualify as the team ERA leader, but no one else who pitched more than 100 innings for the A's had a better ERA.